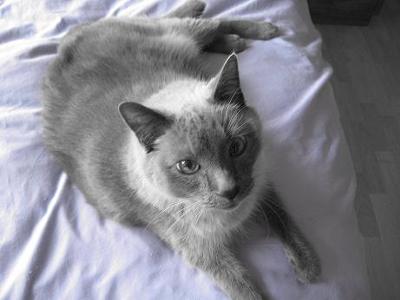 I got my siamese cat Jenga (a/k/a Little, Little Bear, Scooter, etc...) as a kitten for my 15th birthday. This past Sunday, I had to make the choice to hand him over to God. It was the most painful moment I have ever experienced.

Since I got Jenga as a young teen, he has been there through getting dumped by my first boyfriend, going off to college, going off to grad school, getting that first big job, moving to a big city, and then a few more boyfriends. Any time I needed to cry, his furry neck was my shoulder.

Perhaps what makes it so hard this time is I need him more than ever, and he's not here.

I used to joke how young-seeming he acted, even when he was 15. Then, one morning, last October, he had a seizure. He had been acting strangely and choosing to sleep away from me. Early that morning though, he ran to my room, jumped on my bed, woke me up, and then started seizing.

Since then, Jenga and I faced many challenges. He lost his hearing shortly after his seizure, and was on one more more medications (which he took, but hated-- he was such a good boy) all the way until the end. His legs were weak and he would drag himself around. He became incontinent and had trouble going to the litter box. Slowly he declined until I had to ask myself if it was fair to let him keep going.

I called the vet in tears multiple times, but it didn't feel right. Then, after a few bad days, he hurt himself trying to use the litter. As I cuddled next to him on the floor and waited for my friend to pick me up to take him to the ER, he raised his head and looked back at me. I told him I would be ok, and that it was ok for him to go.

When we got to the ER, he tried to tell me he wasn't ready, but I had to be the caretaker one final time. We had a heartwrenching goodbye, and the moments seem like such a blur. After the vet told me he was gone, I lost control. I had been holding strong for him.

I have been a mess since he left me. I haven't had a single moment where I just sit down because I can't face the silence. It was me and him, and now I feel like half of me is missing. The funny thing is that if given the choice, I would do it all again. I find hope knowing I will see him again.

Thank you for reading. I hope you are doing ok with your daily struggle to cope with your loss.