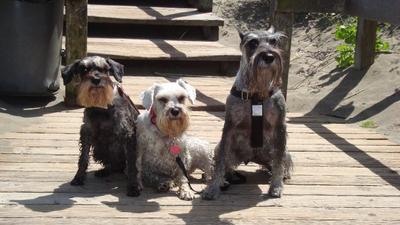 I lost my tough little Schnauzer girl Nicki last year to bladder cancer. She was quite a personality and I loved her so very much. She had been having repeated bladder issues which turned out to be TCC, cancer of the lining of the bladder and urethra. It tore me up to watch her try to urinate and not be able to.

I spared no expense trying to save my girl but nothing worked. I had to let her go on March 29th at 5:15 p.m. It was the hardest thing I have ever had to do.

I want to share with others a true story about what happened after Nicki passed away that may help ease some of your pain and give you hope. This is a TRUE and bizarre story, but I am so happy it happened.

While Nicki was sick, I used to look into her beautiful dark, long eyelashed eyes and talk to her, telling her that if she had to go I would be so sad and wish that she could come back home. I knew it was ridiculous, but you know how we pet lovers can be. After Nicki took her last breath, I was left alone with her in the vet's examination room, with her head resting on my forearm. Her eyes remained open and I tearfully talked to her and told her again, that I was so sorry and wished she could come home.

I have two other Schnauzers. We were all devastated. I don't remember that night much (except sobbing). The next morning a friend called and asked if I needed company. She came over and to my dismay had a 3 year old boy (she was watching for his mother) asleep in her car. I wasn't in the mood for a child due to my grief, but welcomed her company.

We were on my front porch while the boy slept in the car. He finally woke up and played around the front lawn. My other two dogs were excited to see the boy and were making a fuss at the door. I opened the door to let them out to see the child, but their exuberance was so much that I ushered them back inside.

To our surprise, the little boy looked around and asked "where'd your 'nother dog go?" We were amused and asked him if he saw another dog. He said yes, and seemed very concerned that the dog wasn't brought in the house with the others, and he began to look behind bushes and around the corner into my garage. He was confused and said "where did it go?" My friend asked him what color the dog was and he said "white." My other two Schnauzers are dark. Nicki was very light silver and some described her as a white dog.

We went into the house shortly after that, and the child spotted a picture I had up of my dogs. He pointed at Nicki in the picture and said "there's that dog!" I have never believed in any such thing, am very skeptical of everything, but this child had seen Nicki. I have never seen the child before, he did not know about my dog, and was only three years old - too young to "act."

It gave me comfort to know that our pets survive death. Nicki came home. I could sense her being around for a week or two but she is no longer. So.... it isn't just my dog that survived the euthanasia - all animals must. I hope this helps someone with their grief. 100% true story. If it wasn't for that child I would not have known. I would have ignored the feeling of having her around the house. Oh... one more thing. I asked the boy "was the doggy happy or sad?" to which he replied "HAPPY!"