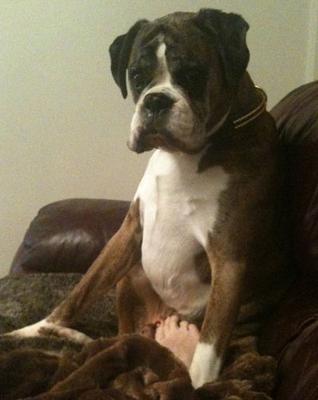 Three weeks today my beautiful baby boy Boxer dog Tigger was laid to rest, it was twelve months ago when Tigger was diagnosed with an enlarged heart. It all started when I used to take him for an hours walk around my village, as we were nearly home Tigger stopped in his tracks, looked up at me as if to say mum I can't go any further. We waited a while then carried on home. Some weeks later Tigger kept trying to clear his throat, we made an appointment with our regular vet who said he may have a chest infection so gave him antibiotics and steroids. This did'nt work so the vet suggested they would try a camera down his throat, Tigger was taken in for the test but as they were going to do the procedure the vet said don't put the camera down, Tigger turned blue they brought him back with an injection.

They then decided to take chest xrays which showed he had an enlarged heart, called us in and said Tigger could go at anytime. The vet said he would try Tigger on heart medication and see how he goes. It worked for twelve months, Tigger was great like a new dog.

Then on 29th May Daddy took him his usual morning walk over the field 100 yards from were we live, the vet suggested only 10 minute walks once morning and once at night. As they were both coming off the field Tigger collapsed. My husband waited a few minutes then Tigger managed to get up and make his way home. I was in bed the window was open, I heard them come back. Tigger vomited then lay under our pampas bush, he then got up walked through the house to the back garden, drank fresh water I had put down for him then dropped down with exhaustion.

I phoned the emergency vet who said bring Tigger down a.s.a.p. My daughter in law took us down. As we entered the vets surgery Tigger just lay on the floor, the vet came over and picked him up and carried him to his room placing Tigger gently on the table. He gave Tigger a thorough examination, looked in Tiggers mouth and said he was so anaemic and something else was going on as well as his heart condition. The vet said Tigger was quite poorly, he could take bloods but we would still be at the vet hospital 6pm that night and he would still say the same thing "the best thing we could do was let Tigger go."

I was devastated!!! We called my daughter in law in to say goodbye to Tigger who had drove us to the vets and also was very close to Tigger. We cried together, I stayed with Tigger kissed him talked to him and loved him until he fell asleep, the vet let me stay for a while to say goodbye.

I have now received Tiggers ashes and a cutting of his hair which I have had made into a necklace with a blue Forget Me Not flower with his hair you can see inside the glass & engraved on the sterling silver back of the necklace a wonderful verse, which I am due to receive tomorrow. I have cried constantly missing my boy aching for My Tigger!! I miss him leaning on my legs on the sofa, I miss his snore in the bedroom, every where I went Tigger followed, we understood each other. If Tigger could talk he would and had a fantastic memory. I could write a book the things he did, I brought him a toy every week.

I love you my darling miss you loads, god bless you,

Mummy Daddy & all the family xxxx