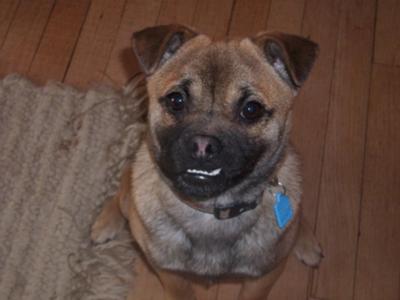 I was there when he first was born. It was July of 2008. Somewhere around 1 o'clock in the afternoon. He was a mix breed of a pug and a Shiba Inu. He had 3 other siblings. I watched them grow, as always. They started walking and their eyes opened and they could hear and you looked in those sweet eyes and were just absorbed in their sweetness. They were very funny puppies. They would crawl up behind your neck and nap there. They used their two front paws to slide across the floor.

When they were about six months, it was time to sell them. We gave Nacho, a boy, to some friends of ours. He was only 1 year old. I couldn't believe it. I thought it was a joke. One of the people in their family had come over and told us a horrific story. The boy's father had been walking the dog, and the leash snapped. Nacho ran in front of a bus, and died. I didn't believe it. My heart was racing. I slid to the floor and just burst into tears. It felt as though someone had thrown switchblades at my stomach.

I curled and just thought of how young he was and he didn't really get to do as much and he could have had such a better life. I thought of when I first held him when he was only a minute old. I thought of him licking my face and nibbling at my friend. It just didn't seem real. I looked at one of the only photos of me and him and just sobbed not thinking at all. Just screaming wishing he was in my hands. Petting his fur...

And here I am now. 2 years later still coping and reminiscing. Still sobbing at 3 in the morning wishing I was holding him. Wishing he had a chance to live his life. Wishing that I could just punch that truck driver in the face. I barely remember the short time I spent with him, but I will always miss him. R.I.P. Nacho <3