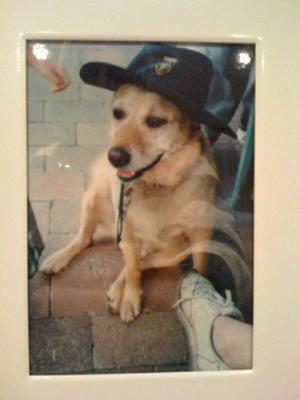 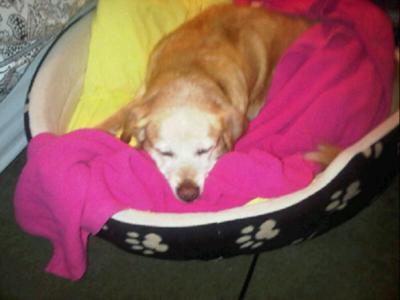 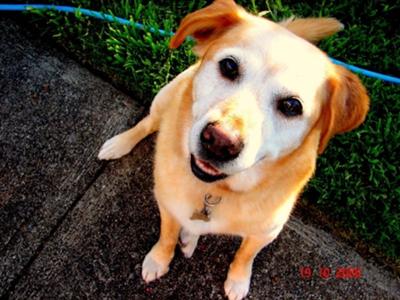 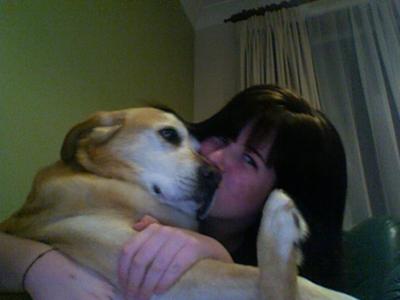 This is a story about a very special young man. A man who could touch the lives of all the people whose eyes met with his. No matter how ugly, dull, boring or annoying you might of been. This boy could tolerate even the worst.

Ginger McNamara was born on the 25.5.97, not that I knew him then, it would still be 2 years until we would grace each others presence.

From what we heard of his past he use to run away, a lot, and I mean ending up in the pound up to 3-4 times a week. He was neglected, all he ever wanted was somebody to show him the love he yearned for.

After moving in to our new house, we had just been broken into, my mother and father decided that we should get a guard dog, so we ventured off to the pound. We looked in all the cages but one seemed to catch my mothers eye. After we had left, all my mum could think about was this one medium sized ginger dog, who was the only one who didn't bark, did murmur, just sat waiting for his fate to come, it seems that day it came.

After a week of discussion, my mother returned to the pound once again locking eyes with this young ginger dog who was ironically named Ginger. She knew that we had to have him.

So later that day we head off with a new dog in the car back to our house, completely unprepared for what was to be many years of hard times, good times but most importantly a life changing experience.

As we arrived home, he was greeted by my older sister and her friend, he was scared but in his eyes he had hope that it would be a great place to be.

I at the time was about 6 and had a friend with me, we were sitting on the grass outside with this new Ginger dog, who proceeded to hump us. My sister wanted to take him for a walk so off she went, and when she returned with no dog, that's when we began to worry. I knew when tears streamed down my face because he was missing that this wasn't just a simple dog, it was something far more special.

We later found Ginger, back at the place he "loved" the most, the pound.

After 2 years and many, many funny experiences, our whole neighbourhood began to benefit from the friendly face of our Ginger, with our next door neighbours also finding that special connection with him.

Although over the years we had many funny stories, one of my favourite would have to be when Ginger jumped into the boot for 2 nights and we thought once again, we had lost him. The look on our faces when we opened the boot to see that friendly face once more.

As Ginger started to age, I was beginning to go through a tough time at school. I honestly do not know what I would of done without that boy. I often thought of how I could go on, but I always had somebody next to me to comfort me even if it was just sitting with me while I cried. Always coming up to me and putting his paw on my knee when I was upset. It was something we always had.

No matter what mistake I made, he never judged me. Without him, I would of never got through the things I got through. He made me feel strong. I wondered how something so beautiful, pure and loving could love somebody such as me.

As his health began to deteriorate throughout the year, and his 13th birthday came and went, I knew this could be the end.

On the 13th of September I was studying for my modern history exam, when my mum came to my room and told me Ginger had been vomiting all night. I immediately went out to see what was happening. As I watched him vomit multiple times, I knew this was not good. We quickly called the vet and they said to bring him straight down. As Ginger was x-ray and we were told his lungs were filled with 80% fluid and his heart was not strong enough because of his old age, my heart broke.

We were told that his chances were very slim. 12 hours to be exact. I have never felt so horrible in all my life hearing those words, words that I never ever wanted to hear, something that broke my heart in a million pieces. But still Ginger in his worst moments came to me while I cried and gave me a cuddle.

We returned home. He had began to weaken very quickly, by this time it was about 3 in the morning I still had an exam in the morning but that was the last thing on my mind. My mum wrapped him in blankets and on his cushions and told me to go to bed. She said if any changes went on she would wake me up.

After about 20 mins of restless sleep, she woke me up and said these words "I don't think Gingers got long." I screamed. I hated this so much. As I walked out into the lounge room, I saw my best friend struggling for breath. My once beautiful playful boy, in his worst hours, he lifted his head to me and I ran to him and cried on his head.
We moved him to the middle of the lounge room so I could lay with him. For those last hours we watched each other, in 2 moments of weakness he closed his eyes and stopped breathing, but opened them immediately after and saw me staring at him. He continued to watch. As the 12 hours past, my hope grew. It was almost 8am when I was told I had to go to school, I held Ginger and felt his heart beat and told him how much I love him.

Through that whole exam, I sat and cried. I thought of my best friend. Once my exam had finished, I gave my mum a call she told me "To get home as soon as I could." I rushed home barely breathing.

As I walked in the door I saw all my neighbours standing around my beautiful boy who took his last breath when I had seen him. I collapsed and screamed once more. Everything came crushing down. My best friend was dead. My life support gone.

September 14 will forever be the day I lost the best thing I have ever had.

Almost two months on, and I still can't forget this story, I replay this in my mind almost everyday and cry every now and again, for him.
I think it's something so special that I have experienced. Never have I felt love that strong, never have I felt that I'm okay.

I still have a huge hole in my heart, which I'm sure will never go away. I feel so lucky that I had an amazing person in my life such as Ginger.

I love you Ginger.