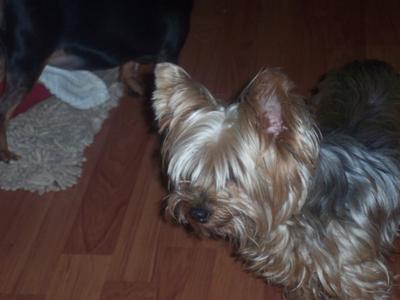 Although I only had Noelle, a silver back yorkie for only three years, she meant the world to me. I took her in after being told that her owner was looking to give her away because the place where she was moving into did not allow pets. That was at the grooming salon, so I told them that I would ask around and when I returned to pickup my other two dogs, Jersey and Rex (mini pins) I announced to the girl at the counter that I had found a home for her. She asked me who was it? I told her it was me and smiled as I looked at her shaking in the cage waiting her turn to get picked up. So I left my name and number and a few hours later, Carole called me and we set up to meet the following week.

Carole dropped her off on January 21, 2008 and told me I could change her name, but I said no, her name is Noelle and that's how she'll stay. Carole told me that Noelle was used as a puppy mill by a breeder and was not shown a lot of love; don't worry I told her, I have plenty of love to give. At first, she was shy, and would only let me touch and pet her; she had new friends now and company all day long. In May, my husband took his vacation, a great bond was made, she was now his dog. She followed him everywhere he went and had total meltdowns each time she saw him and he played with her, she was so happy, that one day she shook so hard, she dropped a "brown nugget" on the floor. Boy did we laugh at that!

She had a silly bark that sounded like a seal, she loved to roll in the dirt in the back yard and would come out filthy. She and Jersey would snuggle all day together, she loved her treats, loved to walk and was a kind, loving soul. So when she passed away, on January 31, 2011 a part of me died with her. She died in her bed, curled up in a little ball with Jersey and Rex around her. I am just sad I didn't get to tell her I love you one last time. I miss my little No-No face, as I used to call her. I know she'll be waiting for me in heaven, so we can play again.

I love her and miss her terribly, she my little angel. Rest in peace, my love.

I love you, Noelle.