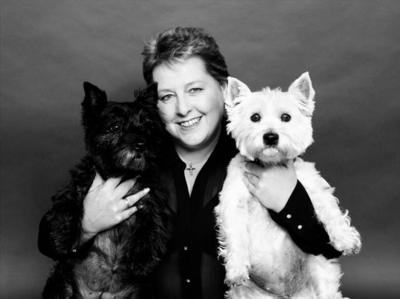 This time last year I lay cuddling my 16 year old Westie, Murphy, who I knew would not be with me for long. It was her birthday and it also became the day she chose to leave. I can’t explain the pain that her death brought me; the overwhelming sadness of no longer having her constantly by my side.

I know that there are loads of people who will not understand the devastation a person can feel at losing a pet and that’s OK – this site isn’t for you but there are so many people who do need to grieve and share memories in order for them to heal. I am hoping that this site will help.

I brought Murphy home on Tuesday night – it has been a very heartbreaking week since we had to take her to the vet and ask if she could be put out of her distress. Her pain had not been physical but I sensed that she was in emotional pain and I knew it was time to let her go, even though everything in side me screamed for just one more day in her presence.

She was my saviour, my teacher, my life and the thought of her not being here each morning when I awake tears me apart.

For so many weeks I pushed aside the thought that I would someday need to make this decision. I had hoped that she would just sleep away and yet if she had I probably would have felt cheated. Instead she opted to let me take charge and in doing so teach me a lesson – what the lesson is I can’t yet formulate into words but I know deep down that there is a lesson to learn.

I knew the day before that the time had come and when I wakened that morning – the morning of her 16th birthday – I knew it would be our last together. All day we cuddled on the sofa waiting for the 5.30 pm vets appointment. I watched her intently, looking for signs that she would recover, hoping that she would give me an indication that she was OK. Instead she almost appeared to come close to death, only to shake herself alive and then fall back to sleep.

She didn’t want to leave me: she was trying to stay. Her little frail ragdoll body was exhausted by life and the effort of living. She couldn’t even muster the energy to lick my face or open her eyes for more than seconds.

Sharon and I, Chloe and Murphy had a family hug for the last time and we left for the vets.

For the whole of that 10-minute journey I cradled her like a baby and told her that I loved her and what I was doing was breaking my heart. I told her that I didn’t want to let her go but knew that I had to. I kissed her gently and for the first time in days she responded enthusiastically. She even nipped my nose playfully which she always had done.

She opened her eyes, bigger and brighter than I had seen in weeks and I instinctively placed my hand on her chest and starred back.

A surge of energy passed from her to me and my right hand throbbed with an intense heat. The entire time she held my gaze and I sensed that she was giving me permission to let her go. I didn’t know whether to feel joy at the privilege of this exchange or scream with sorrow at the inevitable outcome.

Something powerful and magical had happened; a gift had been given to me – I just didn’t know what to do about it.

She rested against me as I carried her into the surgery – it was a position that we had become used to over the past weeks and I would come to miss that dependency. I laid her on the table and she immediately lay down on her stomach with her head between her paws. It wasn’t her usual position but it meant that Sharon and I could go to either side of her – she was generous to the end.

A little sedative was given to calm her, although she probably didn’t need it and we where left to say goodbye.

I thanked her over and over again for all the things she had taught me, for all the wonderful experiences we had had and for loving me unconditionally.

I wanted to lift her up and run out of the surgery and just take her home. We even discussed it but that was selfishness talking and not the love we had for her.

The vet administered the final injection and she was gone.

I think the only reason the guttural scream inside me didn’t force its way out was because of shock. The sense of loss was like a physical body blow. I have never known so much emotional pain.

She was gone: my baby was gone.

This is just one excerpt from my diary - more can be found on my here.