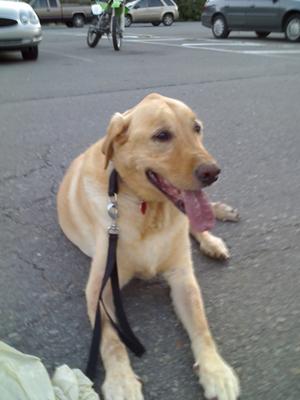 The day I looked out the window and saw this little yellow puff-ball tottering up the sidewalk following my Husband into the house, my heart instantly warmed. He was absolutely adorable and I knew Spike was ours forever.

Now our beloved Spike is affectionately remembered forever in our hearts. We said good-bye to our boy last October, 2008. Spike brought ten wonderful years to our lives. He was our best friend; bringing affection to everyone he met.

Spike was full of vigor and punch and doggie smiles. Say car drive and he practically knocked you down charging to get the car. Most enjoyable were our walks, regardless of the weather: from knee high snow, zipping through the white stuff, or strolling in the rain ..from sunshine to the bitter cold didn't stop our boy. Jaunts with Spike were always amusing, making us laugh.

Running into the woods, he would find the largest log and muscle onto it with his big maw and gallop through the path with it. Or he would chomp onto a 8 foot tree limb and charge through the path until he encountered two trees alongside each other and bam, he couldn't get through. He would back up and try again. But he would always, somehow figure how to get through, tilting the elongated limb this way and that, going sideways and charging through. A lot of times it was hard for Spike to surrender his new found stick-toy, wrestling it from his mouth. One of us would toss the big branch high into a tree so it would be out of reach. Spike would cry and yelp, circling the tree-truck. 'Come on', I'd say, 'we have tomorrow.'
The time Spike mad-dashed around the yard with a bird's tail jutting from his mouth, my Husband chasing and tackling him to the ground. All I could do was laugh watching Jeff wrestle with Spike, prying his jaw open to free the dead bird. All we saw was white teeth a gridlock, a black feather stickng out. Funny dog.

The way he groaned like an old man when he layed down, give us big doggie grins, or the way he would sniff the summer air with his snout stuck in the air always made me smile.

We have a lot of comical times heaped in our hearts to smile and muse over.

However, we've had our turbulant times with our beautiful boy too. He endured suffering at a young age when he accidentally fell from a loft and shattered his femur. Gut wrenchingly we thought we were going to lose our boy, but he pulled through his surgery, and after weeks of nursing, he was as good as his puppy self, zipping past us we couldn't keep up. He was a strong boy.

We had some great happy years.

In Spring 2008, Spike became deathly sick. Worried. He wouldn't eat and became close to dehydration. I wouldn't give-up on him and reared him back to health.

Things were normal until the beginning of summer. It was then, Spike's respiatory began to decline, his hind-legs were becoming stiff. His once long walks becoming shorter. I was in denial, convincing myself he was going to get better. But he didn't. Heartachingly, we thought the worst that he had cancer. But the blood tests came back clean. However Spike's liver enzymes were high, (though I gave him milk thistle) it helped some in the beginning, restoring some of old vigor, but after a while he regressed. He was slowly shutting down. His breathing became laboured, and he could barely climb the stairs. He would climb to the first landing, then my Husband would carry him the rest of the way.

My emotions were mixed of denial and reality. I was sick with grief, I didn't want to face life without our beloved Spike.

His last three days he wouldn't walk, go to the bathroom or eat. I didn't want to take him to the vet afraid he wouldn't come back out.

Devastatingly, we made the decision to say good-bye to our beloved boy. Together we watched him fade and pass over, hugging him tightly, our sorrowed hearts grieving. His wonderful life a flash through our minds.

We love you very much Spike. Always in our hearts. We'll miss you always.