'Our Brave Porter,
Fighter to the End' 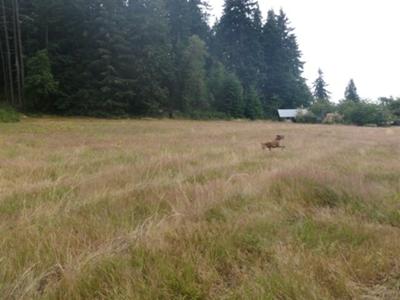 Porter flying in the field

Porter was 10 years old when he left us. I am a freelance writer and for some reason, I cannot find the eloquence that is needed to tell his story. My heart is so heavy.

Two months ago we found out that Porter, our Boxer, had a tumor in his stomach. Going in to the surgery, things looked grim. Due to the placement of the tumor there was not much hope for surgical removal and we were looking at just opening him up and getting a biopsy. But the surgeon called after the surgery and it was a miracle from that day forward.

The tumor was completely removed, the margins came back clear and there was a minimal chance of the cancer spreading. We were on top of the world and went forward with our summer with the happiest and healthiest Porter we had seen in years!

We live in Seattle but have a second home on Whidbey Island. Last summer we spent it with Porter puking and losing weight and this summer, we watched with joy as he ran the trails and romped the beach and acted like a puppy at the age of 10.

Here we were spending the summer on an island here in the Northwest where Porter was the most at peace with our entire family, snapping pictures left and right of Porter and his "sister" Scota doing their "Boxer thing" on the sand, in the woods.

Two weeks ago today, in the middle of the night he experienced bloat. I do not know how long he was sufffering before he came upstairs and woke me up. I panicked. It was 2 a.m., it was raining and I could not get off the island via ferry. I found a vet that answered the phone and enlisted my neighbor to drive me 30 miles to the vet's house where he could only put a needle in Porter's side to relieve the gas.

We drove another hour to an emergency clinic and Porter was in shock so all they could do was pump his stomach and try to get him back in shape for us to drive him to the hospital in Seattle where he had his surgery two months ago. He was in such bad shape but the vet gave us some hope. He had surgery but the stomach had already started to die. They did not think he would make the night. He did!

We went and saw him, the entire family, me, my husband, my kids, Socta and my Mom. He looked so excited when he saw us. I asked him to come home but there was a look in his eyes that was telling me that he could not make that possible. We left the clinic and 5 minutes later as we were driving away, they called to say that he coded. My husband and I stayed with him for a while and massaged his warm body.

We are devastated. This is one of the most difficult experiences we go through, losing a family member.

He was such a beautiful and generous spirit. I have pictures of him from days before his passing of him flying through a field of tall grass ... an athlete with strength both physically and emotionally. It would be Porter who would fight to the end.

I am still haunted by that night. To hear him crying in pain. To see the look of fear in his eyes at the clinic. To feel so helpless.

I am trying very hard to focus on the "life" that was within. But we miss him so much.

I am having difficulty getting past the woulds, the coulds, the shoulds. I am watching Scota and feeling her loss and wondering what the future holds for her.

My kids, Scota, and I went on the same trail today that we went two weeks ago. Two weeks ago we were all running and laughing in the woods with no idea whatsoever that that night Porter would begin his journey to leave us. On the trail, my daughter, whose 3rd birthday it was today, slipped and fell and as we sat with her there was a rain shower of pine needles. My son remarked about them.

Later at the end of trail, the rain shower happened again. As I have been doing every day, I spoke with my children about Porter's spirit and said that was Porter flying along on the trail and causing a rush of wind to make the pine needles fall on us.

There is comfort in knowing that Porter is with us each day in spirit but I miss snuggling with him, watching him play with Scota, listening to him snore. I am so conditioned to "Porter & Scota" and it is so painful to see Scota solo.

I read others stories here last night and just cried some of the deepest tears that I have ever cried. Today I found the strength to share Porter's story. I am so empty without him. We love you dear Porter. Thank you for being such a gift to us.