'Our Dogs Missy and Queenie' 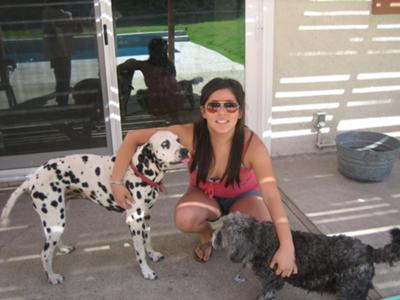 Queenie and Missy on a hot summer day

My family and I have always been dog people. From the time I was born I could never remember a time without our family pets. When my mother's dog Princess died I was in the first grade and was devastated (for a child) as a result of the death. So my father went to the animal shelter and bought home a mellow four year old black dog named Queenie. She was chubby and stout but that just added to her jolly and carefree personality.

Queenie became the queen of our backyard and the neighborhood. She would dig holes for her bones, destroy everything that was chewable and due to her wandering nature would take strolls outside of her fenced home but always returned home in time for breakfast! She was a true hippie at heart! As my parents schedules became busier they felt that Queenie was getting lonely and wanted to get another dog for companionship. So in 1996 we adopted Missy.

Missy was our family's beautiful Dalmatian who we had in our family for 14 years. We adopted her at birth from our grandmother's neighbor, who's dog had a litter of 10 puppies. Because of the affection the neighbors shared with grandmother my sister and I were able to have our first pick of the dogs. After playing with all the beautiful and small puppies my sister and I made the tough decision to select the puppy named Missy. She stood out of all the puppies and immediately tugged at my family's heart. She had one blue eye and one brown eye, perfect health and friendly.

Missy and Queenie became friends from the start. Queenie took on the role of the big sister and trained our Dalmatian (who are known to be high strung) to be a loving and mellow dog. They would eat together, chase animals that came into the yard together and have friendly competitions for our affections. They became a daily part of our lives and we could not take any vacations unless we had someone able to feed and care for our dogs.

They spent their days in a big backyard playing in the California sunshine, joining the family on walks and runs, enjoying family parties, and just in general being happy dogs. They never bit anyone and were friendly to anyone who sent foot in our yard. When I joined cross country my father would bring our dogs to the races and of all the dogs they both gained the most attention because of their sweet demeanor and beautiful coats.

As time went on and I went through drama, heartbreak, and academic stress my dogs were always by my side. It was felt good to know that even in my lowest of times my family and dogs loved me unconditionally. They were the best and loyal friend anyone could ask for. However, in 2008 things did not go well for Queenie. She was reaching seventeen years and had already gone blind, deaf and had arthritis in her joints.

While I was studying for finals my senior year of college, dad informed me that it was time to put Queenie down, she had fallen into the pool twice that week and was going to the bathroom on herself. I knew it was time as well, she lived a good life and was very old. However, my family and I were most concerned about Missy our dalmatian.

The day Queenie was taken away, Missy escaped into the front yard confused about what was going on. Missy was a home-body you could not force her to run away she loved being at our home. For that entire week Missy was very sad, she was not her happy energetic self. We made her life as comfortable as we could by allowing her into the house to wander, she slept inside and we gave her extra attention to ease her sadness.

Missy was getting older too. She suffered from seizures and was not as energetic like she was a puppy. Two years passed and Missy was getting slower and weaker. Everyday we would think she would bounce back to her old self, but it wasn't to be so. She was not in pain or suffering she was just getting old. None of us could bring ourselves to euthanize her because she was still eating and wagging her tale, however she would collapse if she walked too far.

When we made a decision to euthanize her on a Monday, the entire family cried the entire weekend. I drank heavily and cried myself to sleep to try to ease the pain. But on her last day with us I saw how much pain she was in and prayed to God for a miracle. He took her from us that Sunday. She lay herself down in our backyard next to her favorite person (my father) by her side and closed her eyes. While it is still painful for me to write about this I know that we were blessed to have wonderful dogs in our lives.

That hour we took our dog Missy's body to an animal hospital where she will be cremated and her body will be sent back to us in an urn. My father wants us to bury the urn in the backyard but home to is where the heart is. Missy's heart always belonged to my family and we are still deciding if we should bury it permanently or take it with us wherever we move (which is what I prefer).

I know that our backyard is very lonely and can't wait for the day when I can let a new dog into our lives. While they will never be able to replace my Missy or Queenie, I know that I will be able to love them.