by Beril
(Fort Worth, TX, USA) 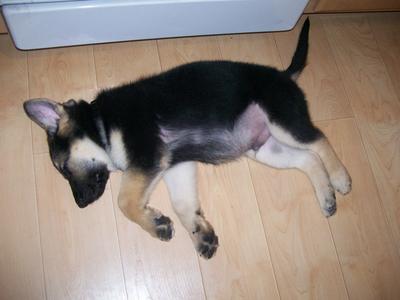 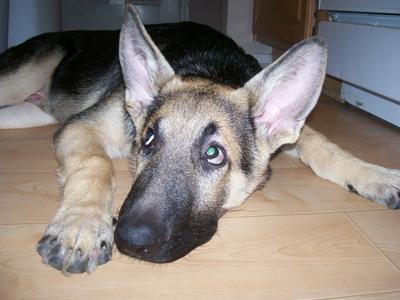 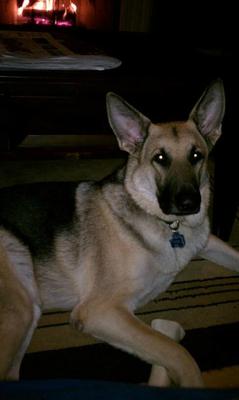 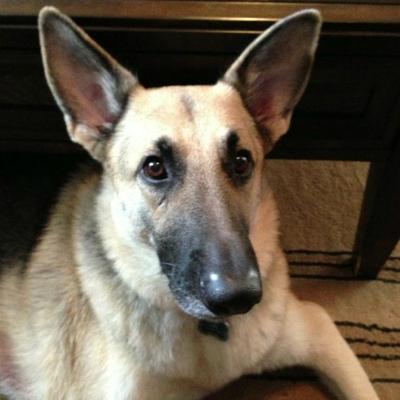 My husband always wanted a German Shepherd, so in the summer of 2010 we found the perfect GSD puppy. We already had a black lab, Sydney, but he wanted this boy too. We named him Jake and brought him home on July 2. He was an adorable ball of fuzz and took to us and Sydney quickly.

We brought him to our vet a week later and scheduled him for his vaccinations and mentioned how he was the most ticklish dog we had ever met. Unfortunately our vet told us he wasn't ticklish, he had allergies. No worries though, over a few months time we found the cause of the allergies (chicken) and changed food, treats, etc. until all was well.

During this time the three of us formed a very strong bond with Jake. He and Sydney would play in the yard during the day and nap together at night. Jake also was very interested in being close to people. He followed me everywhere and always wanted to be laying on or touching one of us. His presence was calming and cheerful for us.

In April of 2012 Jake had a cluster of seizures. We were scared and upset and brought him to the emergency vet. They did bloodwork to see if he had anything specifically wrong or if this was epilepsy. The bloodwork came back clear and the vet told us he was a 'classic epileptic' dog and that he had idiopathic epilepsy (no known cause). The vet reassured us that the seizures didn't cause damage and we needed to see if he had more before we tried medicine.

We brought him home and a few days later he had another seizure. It turned out that we were going to need medicine for him as his seizures got worse and he was having a cluster every week. We started him on phenobarbital which appeared to help a bit, but we couldn't get the seizures to be less frequent without increasing his dosage. Over the summer we caught a break and went 34 days without seizures, and then 44 days without one.

On October 19 he had two seizures ending his 44 day streak and we thought maybe the meds were starting to work. Then on October 24 he had 5 seizures in the morning. We took him to the emergency vet again and they added another anti seizure drug (Keppra) and gave him Valium after he had 2 more seizures there that afternoon. We brought him home the next day and he seemed to be doing better which gave us some relief.

On November 8, 2012 we went to work as always and kissed our boys goodbye for the day. When my husband came home that afternoon he found Jake by the door. He had a massive seizure during the day that just never ended and passed away in his favorite spot. We were in shock even though we knew this was always a possibility.

Our hearts ache with such hurt now that he is gone. He was only here for 2.5 years, but I have never encountered such a sweet, loving, good-natured dog. He had such an expressive personality and despite his epilepsy, he always watched out for us and wanted to be close to us. Everyone would comment on how gorgeous and well-behaved Jake was when they met him.

There are no words to express how sad we are over his passing. It's only been a few days, but we're just devastated. Sydney doesn't seem to understand his brother is gone thankfully and he's helping us with our sadness. This is so much harder than I ever dreamed. Our vet told us we did everything we could have for Jake and that his seizures were not controllable. Although we know now it was just a matter of time, it doesn't make this any easier.

Our vet's office is having Jake cremated for us and we've picked out an urn for his ashes. I'm hoping when we bring him home that will help lessen the pain, but it's so raw right now I just can't imagine it getting better yet.