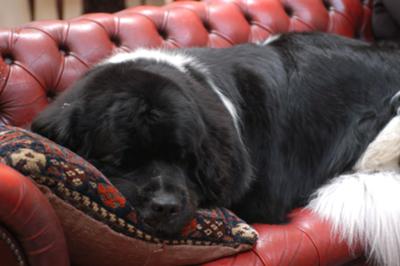 I have had many dogs and I loved each of them the best, but Ragnar, a Landseer newf male, was very special. Special isn't something I can describe. It's something you experience.

Anyway, when he was 9.5, he suddenly started having subtle neurological symptoms. He stumbled going up the stairs. He was sloppy drinking his water. I took him to the vet and the horrors began. I was referred to a Pet neurologist. For two weeks, while Ragnar got worse and worse and was at the hospital, he was misdiagnosed, starved, and then given anaesthesia improperly which eventually lead to euthansia.

I don't know what was wrong with him. I don't know if he could have been cured. I know he had two weeks of hell that I wish he had been spared. While I have accepted his loss and now have two other goofy newfies, both adored, my anger at how Ragnar died hasn't passed. I am not angry that they didn't save him, I am angry that they didn't let him go when all his memories could be about sitting on the couch, drooling on the walls, being my shadow and hanging out in the yard.

The specialist sent him home as cured, though he was stumbling and whining with pain, overnight he became very distressed. I took him back to my regular vet and followed his advice about euthanasia. I helped him out of the kennel and held his head in my arms. The vet gave him an injection and I cuddled Raggie as long he was conscious. He was cremated and a week later they gave me his ashes. From the moment I brought the box containing his ashes into the house I felt him settle back into the atomosphere of home.

He rests in a big chinese trunk in the living room and the knowledge that he is home gives me peace.