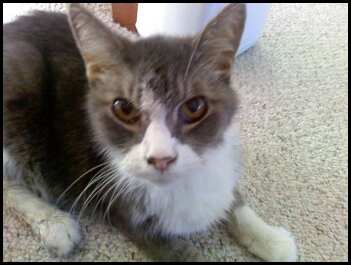 It’s been almost a month. Maybe I’m ready to write about it. I received Simba for my 7th birthday from a neighbor September 1994. He was born in their shed and they were giving the kittens away. I begged my dad to let me have a kitten. We had other cats before Simba but a lot of complications such as defecating in the house; we just took them to animal shelters.

After much convincing my father let me have him. He was so tiny; his head was bigger than the rest of his body. My neighbor’s aunt litter trained Simba, we later had him declawed and neutered. I have so many good memories of him, so many little silly things he would do. He wasn’t a normal cat; he was very affectionate and gentle. He would sleep in my bed every night. When I was sick he would sleep on my pillow.

Around January of 2009 Simba kept excessively drinking and urinating. I would have to clean the little box 3 times a day. My mother took him to the vet; they drew his blood and discovered diabetes. When the news came and we decided to help him, he was a member of the family. We bought the insulin and needles; we gave him the insulin shots. Simba began losing weight, fast. We changed his diet, and threw away the soft kitty treats.

I took him to the vet in June 2009 to discover his weight was lower and the diabetes was gone. I didn’t think it could fade that quickly. There’s a big part of me that feels he never had diabetes, I’ll continue that subject later.

Summer of 2009 was hot; Simba hid in the laundry room where we have concrete flooring so it was nice and cool for him. In the laundry room is also where we kept his food and litter box. This concerned me, because he was hiding so much and I noticed his eyes and nose began to have crust around them. My mom and I took him to the vet again.

Simba weighing 15lbs in January was now about 7lbs. The vet stated that from the symptoms I told him, Simba’s age, and the looks of Simba that he was experiencing kidney failure. I asked about the diabetes, the vet said ”If you keep him under twelve pounds the diabetes won't come back, but you wont get him up to twelve pounds.” This hurt. I remember everything that moment, from Simba leaning up against me begging to leave the dreaded vet’s office, to the look on the vet’s face. I know he’s seen a lot of animal’s pass but I didn’t want to hear that my buddy, my friend that had literally grown up with was going to leave me.

The fleas were terrible, I tried everything from every 2-3 day baths, frontline, flea collars, and I even got him shaved to minimize the excess hair he was digging through. Simba still roamed the house. One night he walked into my dad’s room and squatted on my dad’s slipper. We couldn’t have him urinating wherever he pleased. From time to time Simba would get confused to where he was at. He would occasionally get weak and fall over, all the time still being so affectionate and loving. His appetite did decrease but he still drank excessively.

After the incontinence issue my brother-in-law let us borrow his cage he had for his dog. His dog passed away a few years ago from cancer, he was 16 years old. We brought the cage home, set it upstairs where everyone is at, our rooms, the kitchen, bathrooms, and family room. I put his litter box and food in with him. I let Simba out whenever I was home, I hated him being trapped in that cage but he didn’t seem to mind. Even when I would open the cage and let him come out he would go back in the cage and lay on the towel I placed in there for him.

Simba was only in the cage when no one was home. My mom and dad worked during the day and I was either at school or work. Simba always threw his litter everywhere so you can imagine the mess in the cage. He stopped grooming himself; he had litter between his paws. Simba knew he was sick, he knew he needed to be close to the litter box, so he stayed near it. I felt the cage was not healthy for him, especially the mess he was making in it and he didn’t have a lot of room to stretch out and really get comfortable. My dad put a door up to the laundry room and I put his litter box and food down there. Also we cleaned the cage and put Simba’s favorite big, fluffy pillow in the cage so he had a nice bed.

I always made it a point to visit him. He would crawl up on my lap and sit for as long as I would let him. Simba eventually stopped eating all together, his drinking declined and he began to get weaker. We talked about having him put down; it just didn’t seem like something any of us could do. Simba seemed happy, he didn’t show any pain, and even though it was very faint he would still purr.

Sunday October 18, 2009. Here’s where I’m not sure if I can make it through. About 10am I went downstairs to the laundry room to visit him. He was lying on a blanket my mom placed down for him. He tried to get to me but his back legs wouldn’t let him. I ran upstairs to get my dad and he looked at Simba and his condition. My dad told me to spend some time with him. I got a blanket, wrapped Simba in it and brought him upstairs to my room. As I held him, we all petted him. He was comatose. He would stare off like he wasn’t even there. There were moments when he would look around at all of us.

Everyone left my room and I rose up to sit in my chair at my computer desk. Simba raised himself up and rubbed his head on my chin. We said that was his way of giving hugs. He laid on my chest for some time. He fell asleep so I put him in the empty clothes basket I had in my room so he could rest. I went down the hall to the kitchen to talk to my mom.

After some time I decided to check on him, I turned around and Simba was trying so hard to walk down the hall, he had himself propped against the wall as he slowly made it down the hallway. I sat on the floor and he crawled up on my lap. I took him back to my room; I knew he didn’t want me out of his sight. I put him in the clothes basket and petted him; I talked to him letting him know I was there. The fleas were horrible. They certainly didn’t help him feel better.

My mom and dad left to go to my niece’s soccer game. Simba kept getting up, he got himself out of the clothes basket, he fell over, and his legs wouldn’t let him move. I laid on the floor with him and petted him; he tried to get up again. I picked him up and put him on my lap. He stayed there for some time. Then he started moving again, like he couldn’t get comfortable. He rolled out of my lap; I set him on the floor in front of me.

I was home alone so I called my boyfriend and asked him to come over. Simba laid on the floor, he began to breathe hard, it sounded like he was hissing at first, the sound startled me. I petted him and told him that everything was going to be ok, I was going to be fine, he needed to let go and that I loved him so much. Two breathes later at 4:05p.m. Simba passed away.

We buried him in the back yard under a small maple tree; far enough away so when the tree grows it won’t disturb him. We put a rock down to mark the grave. Next summer we’re going to lay a little slab of concrete and write Simba’s name in it. My mom made a beautiful wreathe and hung it out there. I buried him with his toy mouse he always played with.

I’m uncertain what exactly caused his death. I don’t believe it was kidney failure, I don’t believe he had diabetes. I feel that the vet should have recommended we try to get him to lose weight before giving him the insulin. As I said before Simba was 15lbs to not gain the diabetes he needed to be less than 12lbs. looking back, I feel with diet changes we could have done it without the insulin. I was angry at the fleas. I tried so hard to get rid of them, to make him feel better. I sprayed the house and vacuumed daily.

I can’t dwell on what caused his passing; it could even just be old age. Whatever the cause he’s in heaven now playing in fields of cat nip.