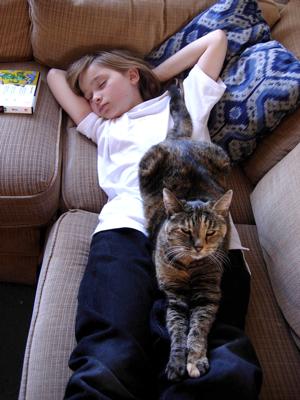 Sparkles and her boy, Asher.

Early this evening I sat down next to Sparkles where she was laying under the Christmas tree and washed her face for her, and her paws.

I took a warm washrag and lightly stroked in the direction of her fur, then took a dry cloth and did the same, making sure the heater was reaching her. Her coat and face shone when she dried.

I changed the towel under her head and tried to get the blood off of her chin as gently as I could. I knew she cared about being fastidiously clean, and I knew it wouldn't be long now. As I stroked her, I talked to her, telling her she was so brave and beautiful. She was able to squint her eyes at me, but not much else.

About 7pm, I was working at my desk right next to her, when she meowed three times. Three short, alert pronouncements. I was by her side in a flash. Her heart was beating faster than it had been all day, and all last night. I lay down next to her and stroked her to calm her. Every so often, a jolt would go through her, shocking us both. Gradually, she calmed down and I nearly fell asleep.

Just before 8pm, she began to cry. I sat with her to the end, and it wasn't very long. Sparkles left us so gracefully, so regally, just as she lived her life. Her heart began to seize and she coughed and cried about five times. I started to cry then, too. I looked at Asher through the branches of the Christmas tree. Oh, she's going! was all I could say.

Asher came and put his hands on her, too. For a second I worried he would freak out. But he is a compassionate soul, and almost 13, and he was very sweet with her.

I told her to be brave, and I hoped our touching her helped her through it. After her heart began seizing, her lungs stopped. She fully stopped breathing, but her heart, for maybe five minutes, would clench, like ringing out a washrag. She would be completely still, Asher and I thinking it was the end, then her heart would make another kick. Finally, her body completely stretched out twice, shaking loose her old soul, and she was gone. We could still feel some electricity in her body, and we stayed next to her until she was cold. She became minute sparkles of energy all around us.

Asher texted dad who said he wanted to know when she left us. I felt very emotional and began sobbing. I found a beautiful framed photo of her and Colin and placed it by her head. I lit a candle, like my aunt did when my grandfather died. I washed my face, feeling the lack of sleep hit me.

We pulled the blanket up to her shoulders and Asher sat with her while I went outside in the windy wet night. I called Talaya and let her know she was gone. And my friend the vet's assistant, and Colin. I had to leave him a message.

I couldn't walk very well. I was wearing someone else's large snow boots and I had to take such short steps so they wouldn't come flying off. She was gone, and hopefully without too much pain. I missed her bossiness, and her love when we were sick. Where was she now? Would we meet again?

I came back in and Asher was still sitting with her. I made tea and he said he wanted to watch TV so we watched 30Rock and sat close to each other drinking our favorite Blackberry tea. During one commercial, I took off Sparkles' collar and bell and set it in front of her photo, next to the candle. I wrapped her now stiff, skinny body in a bright green towel and closed it with a red ribbon still under the tree. I pulled some mums out of a vase and tucked them under the ribbon.

The TV jokes were funny but it all felt flat. We watched the Mentalist and in one scene, someone holds up a framed photo of a cat which looked a lot like Sparkles and was told the cat had died. Asher and I just looked at each other. His friends were texting him and he said he didn't know how they all knew, but they did.

The big Orange cat sits on my lap as I write this. I take a break and put my hands on the empty package that was Sparkles. We'll find a good spot to bury her tomorrow, but tonight I want to touch her one more time. Cats get so much of our love, we connect so physically with them that when they are gone, our hands feel empty.

But my heart is full. Sparkles had a good life with us. And I only wish that I will be doing everything I want to do up until the day before I die like she did.

Before I go to bed, I'll bring her into my office, cover her with flowers and close the door, giving her cat energy some space to fully leave. And keeping her safe from Orange who wants to play with the Christmas bow.

As Asher went to bed, he said, Goodnight Bear, as he often did to her. And I will finish my vigil, too.