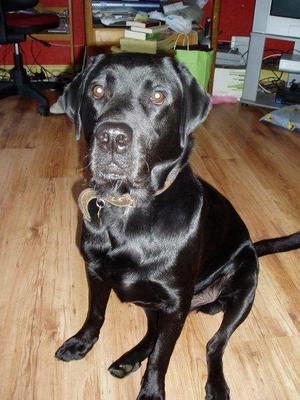 We got Storm when he was 13 weeks old as a companion for our Border Collie, Shadow. We decided on a Labrador because they were the opposite of BC's.

Storm gave us 9 wonderful years, he was the happiest soul I've ever known. His life was complete as long as he had a Bonio, walks, dinner, a comfy bed and a cuddle from us. He used to get so excited when we went out for walks, and even more so when he knew he was going to the river or lake.

In time we ended up with 3 Collies and him. He was the calm, unendingly loyal spirit in our house. When we were sick he was the one who would cuddle up to us and not leave our sides.

At the end of April we noticed he couldn't pee properly and duly took him to the vets. 2 weeks later we were told he had prostate cancer and he would probably only live another 7 months.

He gradually got worse quicker than that though. On the 1st July we knew it was time. We went to the vets and were told his lymph nodes were incredibly swollen and he couldn't walk properly because his nerves were being affected. We decided it was the kindest thing to let him go. We were there until the very end with kisses and cuddles. It was peaceful and we knew it was the right thing, and the ultimate act of love, he'd given us so much over the years, it was the least we could do for him.

We will miss him forever. We will take his ashes to the river and lake he loved so much, and I will keep a little for a resin pendant.

Goodnight my beautiful man, we will see each other at the bridge. Come visit. xx