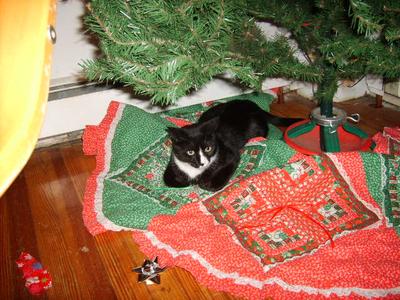 Oreo came into our life as a neighbor offered to adopt one of the kittens from a recent litter. After much debating, I agreed on paying the neighbor a visit with my son to select a kitten, Oreo was instantly attracted to my son's shoe lace and we decided he was the one, or rather he chose us.

The next two years went on smoothly as Oreo became a ball of fun and delight around the house. He clawed our kitchen chairs and leather couch but we loved him nevertheless. Oreo had a passion for the outdoors, and although I did my best to keep him a house cat, he took every chance he had to escape through an open door if given the opportunity. He probably visited neighborhood cat colonies drank from their bowl and ate from their food.

I took him to the vet once a year for shots, being a healthy 2 year old kitty, there was nothing to worry. So this came to a shock when, unable to urinate for a day, I saw my poor kitty deteriorate and suffer, straining over the litter box and kitchen floor in a constant crouched position.

After doing some quick research on the internet, I decided this was an emergency and took him to a emergency vet. After a quick diagnostic the vet declared urinary blockage necessitating a catheter, and overnight care with flushing of toxins out of blood stream. The complicated procedure, was not a 100% sure to be permanent and the blockage often returned. The estimated fee for the procedure would run between 1200 and 1400.

I was heartbroken and instantly know this was not a cost that a single mom could absorb. I turned to my son and said I was sorry but i could not do that. He understood. He actually thought that the alternative (euthanasia + cremation) was equally outrageous $ 300.00.

We opted to part with Oreo and put an end to his misery, by now he had been uncomfortable and in pain for 24 hours or more. I chose not to stay with him while the doctors put him to sleep. I did not want to go through the pain again. I recently flew back to France to bury my brother of 53 years old.

I keep a terrific memory of Oreo, I never thought I could have gotten so much love and affection from a tiny 11 pound creature. We will remember him fondly.