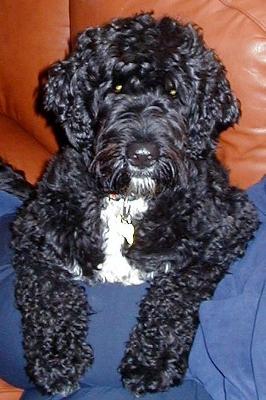 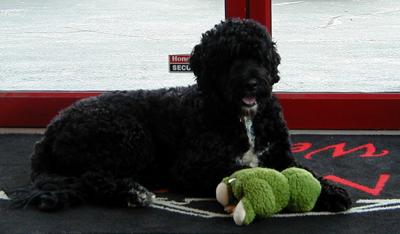 We picked him up! Finally we added one more to our family. Not like we were missing much! The boys were 17 and 14 years old. The time was right. 3 months prior we decided that a dog was going to become a significant member of the family. After lengthy discussions, it was decided that a Portuguese Water Dog was the breed of choice... non shedding, soon to be 65 lbs of energetic character. Long walks, constant training, and never ending affection were going to be daily rituals....


Robbie and I arrived at the breeder as early as possible as we couldn't contain our excitement! 13 puppies to choose from and we had chosen him 4 weeks earlier on an invitation from Toni Lett, Raffles Kennels His sire and dam were award winning show dogs... one from Colorado, the other from Guelph.

We chose the one that was at the bottom of the litter... playing, all the others were piling on his submissive self. Manipulating his way in and out of the other carousing dozen. We could have stayed for hours just watching them annoy, paw and nip at each other. It was his demeanor and his regal white patch on his chest that caught our eye. Echo... we decided that would be his name in a family meeting weeks earlier. We took videos and attached our approval for the addition to our family.

Chaos at the breeders that day... we were first to arrive, injections, tattoos and 8 or 9 other expectant dog owners would arrive during the course of this event. We left about 3 hours later with Echo and Robbie in the back of the Explorer. 15 minutes from the breeder Echo barfed... first car ride and first of many puppy pukes to come..... we laughed and carried on laughing with absolute joy in our new family member. Excited to arrive home and allow the whole family to participate in the elation and pleasure a puppy brings to the home.

The next year he was to bring us to tears from the laughter and joy that permeated. The early short walks and playful episodes were an absolute pleasure. Mischief was part of his repertoire. Our lives changed! I took him to work every day. He became a greeter and a closer at the dealership. Almost everyone that came in contact with him loved him. I did this until he was about 18 months old. Now, old enough to stay home alone with only occasional episodes of shenanigans.

Years past, constant, loving loyal gestures from a dog that we all became very attached. Sleeping by our bed, hearing him breathe and sigh during the evening. Sleeping in until we would get up.... never, never imposing on us.

He so easily adapted to our habits... never intruding, taking my commands without a whimper... an unbelievable, totally loyal creature. I never imagined a dog with this character... so low maintenance and such a constant pleasure. Daily walks on the Richmond Hill Trail, long, adventurous walks on the weekend. He and I, for hours at a time. Months & years past and now, he is old by human standards. 80 + years, suffering from arthritis, short walks, slow to get up, easy to fall... we are sad as we know the time is near... I dread the day.... it arrived last night.

Farewell my loyal friend. You will be in our hearts always!