'The Nose that Shed a Million Tears' 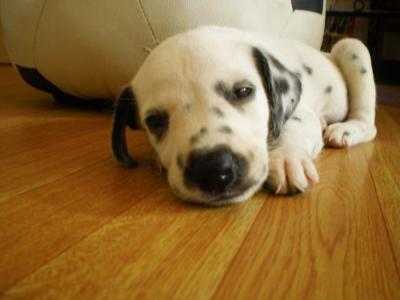 It was a lazy afternoon. After I had finished my lunch, I went out to check on Chyna. I took a glimpse of her as she was sound asleep, looking very tired. I went back inside until I heard a yipping sound. And there it was, Chyna's first litter, and not a minute too soon, another one came out, and another then another. It was around 2 pm and it lasted around 10 pm until she had her last one. It was tiring for me and especially for Chyna. Giving birth to eight puppies is no joke, and I had to assist her.

Weeks passed. They grew up very fast, until the day came when they had to be sold / given away. It was sad but we had to do it.
But on the brighter side, my Mom approved of keeping three of them. :D

I love them all equally. I always enjoy watching them play, run and looking so happy. Spending every moment with them, was heart melting and priceless, but not all the time. We also have issues. Chewed plastic containers, disappearing slippers, broken glasses, disturbing barks and the most common issue in every household with dogs, the scent of newly digested dogfood. :D

Summer came and we decided to bring one pup with us to Capiz, and it was Lestat. A three-hour drive to our Mom's ancestral house. When we arrived, Zero (Chyna's eldest litter) was there. Reuniting Lestat and Zero was a bit awkward at first, but they got along later on. We stayed there for a week. Every afternoon, me and my cousins would always take a long walk at the beach with our dogs.

There was this one moment during a late afternoon when we were heading back home, walking in the shorelines of Atob. Lestat was running around with Zero playing on the beach, gathering sticks and chasing other dogs near the shoreline. They were ahead of me. I was walking slow, admiring the sunset and taking pictures. Then I called Lestat, shouting his name and suddenly he stops and looks into the distance with a tilting head, that gesture he does with his ears when he heard his name, and then he ran. Ran as fast as he could towards me with his tongue sticking out as the wind blows. I was so caught up in that moment. Then he came up to me and licked my face as if we had been parted for decades. I've never felt so loved.

We went home on a Sunday. Things got back to normal and classes was about to begin. I was busy with school work and going to school everyday. I still had time for them though. I would always play with them and tuck them in every night before going to sleep. A few months passed the semester was about to end and Lestat was coming down with something, but I assumed that he would be fine. After the last day of my final exam I still have a lot of unfinished work to deal with so I had to go back to school.

After which, I arrived home on a stormy night and got back to Lestat. He was very weak so I let him stay indoors since I'll be watching over him the whole night and will bring him to the vet the following morning. Then I noticed, he had lost a lot of weight. I was so so worried. I had to spoon feed him but all he wanted was water. I felt hopeless. He vomited and couldn't walk. It was around 2 am and he just laid down getting weaker and weaker every second. I was going ballistic. I didn't know what to do. I held him in my arms crying and shouting.

Mom was also worried and woke my dad. Then he was shivering I couldn't let him go. I was shouting I didn't care if I wake up the neighbors. I was losing him. Then my dad suggested that we should go to the vet's house. And not a minute to spare, we left. As I held him in my arms, he looks at me then wags his tail. I was bursting in tears.
I hugged him and never let go, until...... he gave in his last breath, with a hurtful moan and then his eyes rolled. Then, my world stopped.

I couldn't believe what I've seen. My dad woke up the vet but it was too late. We lost him. I couldn't stop crying. I was in denial. I have never lost anything I value and love so so much. I had high hopes for him. I never wanted him to go. It aches so much that I couldn't stop crying and was blaming myself. I couldn't sleep. I sat beside him, caressing his head assuming he was just sleeping. Then I hugged him so hard and kept crying and whispering I love you and how sorry I am for my short comings.

I had to be dragged back inside the house cause I was crying hysterically and because it was time for him to be buried. As I lay down in bed, all I could think about is Lestat. His cute nose how he makes me forget my anger by looking at me with those puppy eyes, how he performs his tricks so obediently, how he plays with the door stopper and his stuffed animals and how he responded every time I call his name. He gave me nothing but happiness. I'll always remember that.

Til we meet again. Byebye Choy!