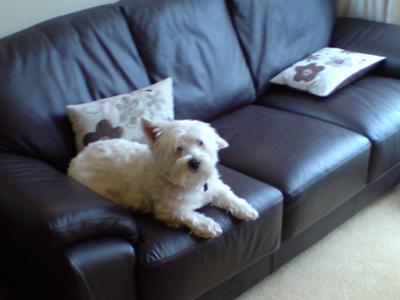 Sam, contributing to the family office.

Today, I was searching through my computer and weeped over a video of my old dog playing with his ball.

It reminded me of how unhappy I am now compared to back then, it makes me want to go back into time so I can feel his white soft fur and see his glistening eyes whenever he saw me.

My West Highland Terrier started fitting when he was 10, I'd never prayed until then.

When he was 12 things developed worse and worse, me and my family loved him way too much to take him to the doctors, we tried but it was like he didn't want to as he would fight us to avoid being put in the car. He was a fighter, a true dog. One night, his poor little mind couldn't cope with the pain and he lost his battle.

The next snowy morning, I placed him into his grave, just wanting to go with him. We planted snow drops that will flower once a year, the time he died in his memory. I know everybody says their dog, wasn't just a dog, I will say the same.

It has been a few months now since the death, I still weep, my happiness must of gone with him. I know he would of wanted me to stop crying, but as I write this story, I think of all the good times I had, and how I just want to see his little face again.