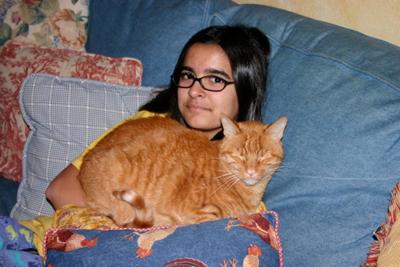 One day, sometime in about, say, 2001 or 2002, Mom and Dad brought a surprise home for my sister and I. We peeked inside the small kennel only to discover a young tabby cat named Tiger. Apparently, his previous owner had given him up due to a husband who was allergic to cats. I wasn't sure what to make of the new cat. He was very still and calm, showing little enthusiasm over his new home. But in my case, me being about 5 years old at the time, I was thrilled to have another pet in the house! We accepted him into our lives, but I wasn't aware of the friendship that would soon blossom between us.

His first few months with us were very difficult. He had a hard time adjusting to his new home and got along very poorly with our oldest cat, Boo-Boo. Every day, he would hiss at him, corner him, and chase him around the place. Eventually, my Dad became very concerned for Boo-Boo's wellbeing, and felt that Tiger was becoming a threat to him, so he took Tiger away to an animal shelter, where he was supposedly placed on death row, from what I've been told.

Time went by just as it had been prior to Tiger's arrival, but it didn't last. Soon, my Mom couldn't stand the idea of Tiger being at that shelter any longer, so when my Dad left to go to work one day, she told him that he had better not come home that night without Tiger.

Fortunately, when Dad arrived home that night, he had Tiger with him. He was back in our lives again, and looking back, I am so happy that that ended up being the case.

As the years went by, we grew closer and closer to one another. We did everything together, and I learned more about him. After I would come home from school, he would greet me at the door, and then join me in my room for a study session, and sometimes he'd even be willing to lend a helping paw to my older sister.

Every sunny day, I would find him taking long sun baths, since he loved heat and light. Even though he loved the whole family, he grew a special attachment to my Mom and I. He was there when I was happy, when I was sad, and when I just needed him, and he loved sitting with my Mom while she read or knitted, trying to bite her knitting needles.

At night time, he would watch TV with my parents in their bedroom, and fought my Dad when he tried to make him leave when it was bedtime. He would finally jump off and head straight for my room and just wait for me, and even fall asleep sometimes. After sleeping at my feet for a while, I decided to try something different. I let him come up to my pillow and I pulled the covers over us. He didn't move. We fell asleep together, and that was when I knew we were best friends.

Unfortunately, things don't last forever. In early January of 2011, my Dad came home from a trip. He stated that he noticed some odd changes in Tiger's behavior, and felt that something was wrong. I began to feel that way too after discovering him in my Mom and Dad's bathroom, a place we normally would have never found him. Another thing I noticed about him was that he smelled terrible, and refused to go to the bathroom and even eat. My Dad finally scheduled an appointment with the vet.

Before Tiger was taken to the vet on the morning of January 15, I caught him sitting by the steps, not looking very well at all. I sat by him and carefully ran my hand down his back. His spinal cord was now sticking out and there was no life in his green eyes. He looked terrible. I told him that everything would be alright, and that we would take good care of him, and then off he went.

After a few hours went by, the phone rang. My sister picked up, and it was my Mom calling from the vet. I could tell by the look on her face that the news was not good. She handed the phone to my Dad. He talked to my Mom for a while and then hung up, saying that it definitely did not look good for Tiger. I wasn't sure what to make of that, so I just waited. The phone rang again and my Dad picked up. It was Mom again. After a minute, he hung up again, this time telling us that the vets had decided that Tiger needed to be put down, and that Mom was currently falling apart.

It took me a minute to come to grips with things and understand what was happening, and when I finally did, I broke down into tears. When I finished, my Dad asked me if I wanted to come with them to the vet, but then suggested that I didn't. I couldn't see my best friend like that. I spent the next hour alone and crying with my oldest cat sitting by me. We weren't very close, but I needed him. The rest of my family finally came home. Tiger was gone.

For the next few weeks, I cried. I cried in the morning. I cried at night. I couldn't go downstairs without expecting to see him sunbathing. I was heart broken. My best friend was out of my life forever, and still is.

Even though I still cry for him from time to time now, I feel good when I look back on all the wonderful things that we did together. His life was senselessly cut short, but the time that he was here was unforgettable. I will miss him this holiday season. I will miss seeing him under the Christmas tree or hounding us for turkey on Thanksgiving or trying to eat the Christmas wrapping paper. But I will never forget him. I will still cry for him, but he's still in my memories.

R.I.P. Tiger. I love you and will always miss you.