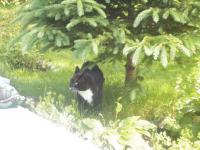 In 1993 I had just finished university in Nova Scotia, Canada (I'm originally from Newfoundland, where I am living again now) when I came across an SPCA group with kittens to give away. I noticed one kitten in particular, a strong, beautiful black kitten with some white on his chest, the tips of his paws and tail, and in a little line under his chin. He seemed annoyed by the others who were chewing and crawling all over each other, and just stayed by himself in the corner.

I went on my way, but had to pass the same place on my way back home. The little black and white kitten was the only one left, to my surprise, because to me, he was the most beautiful and dignifed of them all, if not the most playful. The women there told me, when I asked what would happen to him, that he would be put down. I couldn't bear it and brought the little guy home with me to my apartment where I wasn't supposed to have pets.

I called him Bagheera, the panther from the Jungle Book, and I loved him right away. Not only did he have fleas, he got me kicked out of my apartment, but I didn't care. We moved to another apartment, and then, when I finished my summer job, I took him back to Newfoundland. Poor thing, he didn't like to travel. But then I took him with me to Ontario, where I was doing my master's degree. He lived with me there for a full year before I moved back to Newfoundland with him.

However, I wasn't able to find a job there and took a job teaching English in South Korea. I didn't know what to do with Bagheera, and hated to leave him, but I didn't have many options. My parents were good enough to take him, and there he stayed with my parents and younger sister for almost 15 more years.

Bagheera would have been 17 in February 2010. He had a great life, living in the woods at my parents' house, with lots of space to roam during the day. My parents' treated him very well, as did my sister. But no one loved him like I did.

I came and went from Newfoundland for years after that, never able to settle there, but not able to settle anywhere else either. But I always missed Bagheera, and no one can know what it meant to me that that little guy, regardless of how much time had passed or how far I had wandered, was always happy to see me again, like nothing had ever changed. We would snuggle and love each other - and maybe it's silly to say - but we just 'got' each other.

Two years ago I moved back to Newfoundland with a husband who is afraid of cats. He's from Africa where people don't usually have pets in their homes. So I couldn't take Bagheera back with me. He would have hated to move into the city anyway, and to leave the home where he'd been for most of his life. Then he started to get sick, eating much more than usual and vomiting a lot, but losing weight.

At first I didn't realise how bad it was. But then things started to get worse - one of his front teeth shifted, his hearing went, and he lost all his muscle and body fat so that you could feel his little spine and the bones on the top of his hind legs were protruding. The vet gave him medicine against hairballs, and he stopped vomitting for a while, but then he started again and also stopped using his litter box at all. He also stopped cleaning himself and was losing his hair. It was so hard to see, because he had always been such a dignified cat.

My mother decided it was time to put him down. I fought it but what could I say - she had taken care of him for years and my mother is 66 and my father is 71 and it's hard for them to continually clean up after Bagheera, and they had already been doing it for a year. I feel so bad that I wasn't able to take care of him in his last years. I feel so bad I didn't take him to the vet sooner to see if it was a thyroid problem, or something else treatable.

My mother said doing that was only prolonging the inevitable, but maybe he could have had another couple of years if I had done it.

It was yesterday that he was put to sleep, and it really does seem like a bad dream. I don't know how I managed to go through with it. I was with him right until the end, stroking his little nose and kissing his head. I woke up this morning in a panic, wanting to take it all back, not wanting it to be true, wishing I had done more.

All I can think of is his little body in that box in the cold ground, all alone, and my heart is breaking. But he is buried in the spot in the garden where he liked to lay in the summer.

I hope I did the right thing.

I hope I loved him enough.

I hope he knew that he was my friend and that I loved him and missed him every time I was away.

I will miss and love him always.