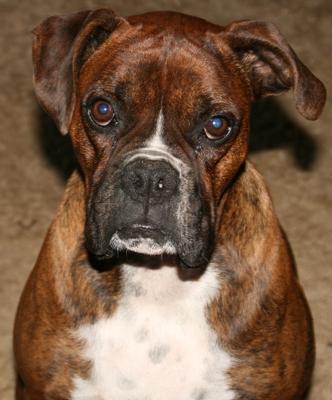 The day we got Logan 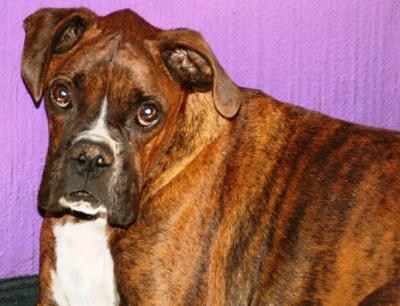 The day we lost Logan

We got Logan from our local SPCA on the 25th of June of 2010. We were his 5th home, according to their records, and were warned about his "behaviour" and aggressive nature. We never saw either. Logan was a big boxer boy, about 3 years old, who was more puppy, than dog.

He was extremely lovable, and got on well with my 4 other rescues. At the end of August, he had a stroke, and lost control of his bottom jaw. With medication and therapy, this cleared up, and everything seemed to be fine, until the 21st of October.

He seemed to be nauseous a lot, I took him to the vet on Saturday, but he couldn't find anything specific wrong with him, I was meant to take him for tests this morning, the 25th of October, but we never got there.

Yesterday morning, I woke up with a feeling of dread, and something kept telling me to take some photo's of Logan, as he wouldn't be ours for much longer. Yesterday afternoon, I found him lying in the shade outside, after getting him inside to his bed, he just seemed to relax, and peacefully passed away, with us and our other dogs around him.

Just after he died, it started raining, but the sun was still shining through the window, onto his face, and when I walked outside there was a beautiful rainbow, it was as if heaven was crying with me.

Today he would have been with us for 4 months. Even though we only had him for such a short time, he had a very special place in my heart, and will be missed every day. Logan was a very special dog, who suffered the most terrible abuse, but still had so much love to give.

Fly free, my Angel, till we meet again.

Join in and write your own page! It's easy to do. How? Simply click here to return to Your Tributes J-L.