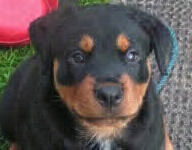 On the evening of 18th August 2009 my partner and I was searching for a darling dog who needed to be loved.

After much searching we found our perfect pet, baby Reuben. The following day we went to visit him in his rescue home and fell in love instantly. Days later we were vetted and given the wonderful news that we were suitable new owners for darling Reuben.

Days later on Monday 24th August the wonderful day came where I could go and collect our darling Ruby-Doo.

Poor Ruby had already been through a tough life being sold from a breeder at just 6 weeks and a week later was given to Four Paws animal Rescue to rehome. We were so lucky to be given the pleasure of our little boy but so saddened by his terrible start in life.

Monday 24th August started off as a busy yet excited day! I went to my Mums where we went to buy Ruby some goodies. Hours later a new cage the size of a house, a huge sack of Pedigree puppy & lots of toys not to mention a cute pink lead we were ready to go pick up our precious boy. My Dad came with us as everyone was so excited and my phone kept ringing constantly as my partner waited the new arrival.

We rung the doorbell and was greeted by my Ruby-Doo. He cuddled and kissed everyone and I could see my Mum and Dad had fallen in love as quickly as Gareth and I. My parents took him home with me following behind to ensure he wasn't scared and at 3pm he arrived at his new home Bar YK where he was greeted by Gareth and fellow customers.

Ruby-Doo's arrival had been anticipated by many and the rest of the day followed with lots of cuddles and playing. I could believe we had a lapdog in Rottie! He was just 12 weeks old but would already bring you the tennis ball and drop it at your feet.

That night he met lots of people and had more cuddles in a day than most dogs in a life. He played in the garden and rested in my arms. Later that night he was tired so fell asleep under the table of the bar as we ate a takeaway with Gareths brother James and my cousin Carly.

Nighttime came and Ruby didn't want to be alone trying to push our bedroom door open. Before we knew it he was having cuddles on our bed and was later fast asleep on the floor next to me. As he slept I couldn't help but smooth him as he was such a darling.

Tuesday morning came starting with 6am toilet break. Ruby was happy and insisted on waking me up by sitting on my head and kissing me, using his paws to make sure I didn't move. Then it was Dad's turn, Gareth has a shower of kisses and then he slept for a while on the bed before going back to his favourite spot on the floor next to me.

Then it was time for his next adventure to visit Mum and Dad's house which had my nieces and nephews as well as my parents dogs.

The day before I had taken Ruby for his first walk to our pet shop where I bought him his seatbelt - this was attached and he sat behind me on the seat of the car for his first trip.
He arrived at my Mum and showered my Mum, Dad, brother, sister in law and niece and nephew with kisses. This dog was a happy boy and had so much love to give.

My Dad chipped him as we learnt very early on that we never wanted to lose our special boy.

He met my parents dogs Lord & Saskia and loved them, they were going to be close friends. Puppies get tired and he soon found every puppy's favourite spot by sitting on the cold fire place! Here he slept so peacefully he was snoring bringing many a laugh to us all especially my niece and nephew.

Later that evening he had his first bbq at my James and Carly's. It appeared without Ruby we weren't welcome anywhere anymore, everyone loved him.

He enjoyed the bbq especially the game of trying to get the fat dripping from the bbq! This soon turned into a game tiring the little chap out so he soon retreated to the sofa with us all using a pillow for comfort!

We returned to the pub where his met more customers before falling asleep. We went to bed and noticed he was still fast asleep. At about 4 in the morning he joined us in the bedroom, falling asleep on the floor next to me again. This was my boy!

Just hours later we were awoken by Ruby-Doo being poorly. The day followed by cleaning up sickness. Putting it down to the disruption and excitement of a new home we just cuddled him and kissed.

However as the night drew in our beloved Ruby deteriorated and by midnight we knew we had to take him to the vet.

Gareth carried his boy to the car and as I drove to the vet Ruby placed his head on my arm as I drove. I looked into his eyes and knew he wouldn't be coming home with us straight away.
He saw the lovely vet Mrs Morris who put him straight on a drip and cuddled him in his blanket. As we turned to leave him there Gareth and I drove home in silence, tears pouring from our eyes.

I rung my Mum and Dad and settled down for a long night. Crying myself to sleep at about 4 in the morning I received a call at about 8am telling me he had pulled through the night and they weren't certain what it was.

That day I had to go to people who understood how upsetting it was so went to my Mums and Dads whilst Gareth kept himself busy working. A call came later that day advising he seemed a little better and I could visit.

Sadly by the time I visited he was unable to lift his head - I left the same vets with a breaking heart.

Friday came and a further call told he had pulled through another night but sadly was still very poorly. He had been placed in isolation and they could confirm our darling boy was fighting the Parvo virus.

Gareth and I couldn't believe after all our boy had been through he was having to fight again. Continuous calls came through but each still showing a little hope as our boy was continuing to fight.

Saturday came and we were told he was still very poorly. I went to visit and saw just how poorly my darling boy was. He was hardly moving but cried when he saw me. I couldn't stay there as my little boy's joy for life was draining from him. I told him I loved him and placed a kiss on him. My cousin was with me and we held each other as tears poured uncontrollably. I knew then my boy wasn't coming home.

Later that evening a small glimmer of hope came when the vet told me they were continuing with fluids and he was having glucose - could my boy keep fighting???

At 8:45 I received a call from Mrs Morris the wonderful vet who kept fighting for Reuben who advised though still very poorly our boy had pulled through another night. We were so relieved until a phonecall came at 10:59 - the nurse rung. Reuben had lost his fight moments before . . . .

Our darling boy was gone and the life around us fell apart. In two days our Ruby-Doo had given everyone so much happiness and love. I rung my parents and tears fell from everyone who had met him.

I was stunned by how cruel life had been. Our darling boy had kept fighting and to lose him now was devastating.

Reuben was just 12 weeks old and had fought so many fights.
We collected him on the Monday and had just 48 hours of happiness, by the Sunday he had gone.

I have lost dogs in the past, my darling Cassie and Izi and know he is at Rainbow Bridge with them now. I couldn't understand why we had only been given 48 hours with this darling puppy - there wasn't enough time to make memories.

In the days that have followed we have continued to ask why? He had had his immunisations, we had done everything properly and we knew our boy needed to be loved . . . .

It has been three days and I think I'll always ask why. Our darling boy put up such a fight to stay with us but he was simply too special for this world.

We loved you so much in the short time we got to know you Rubes but we are still so glad we had you for those few short days.
Everyone he met has been hit by his tragic and sudden death and we will all miss him forever.

Two days of happiness and a lifetime of heartbreak - we'll keep asking why but never regret those two very special days. . . . We are so grateful to Four Paws for trusting us with Reuben and will be eternally grateful to Mrs Morris of Summerhill Vets in newport for giving our boy a chance.

Love you so much Ruby-Doo. I think about you everyday and hope you're having fun with our darling Cassie and Izi. Missing you more than I thought possible - we love you so much . . . .

Join in and write your own page! It's easy to do. How? Simply click here to return to Your Tributes P-R.