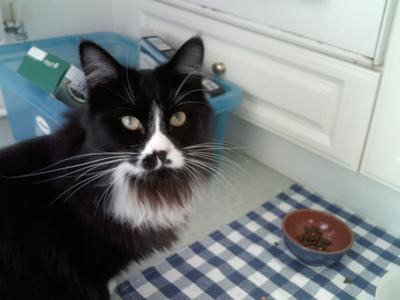 When did you lose Minti?

I have a beautiful cat called Kali. He made friends very easily with the neighbourhood cats so I thought I would get him a live in friend.

I would lie in bed and thank of what I would call Kali's friend. I decided on Minti. I used to daydream on what she would be like. She had to be a she as Kali is male.

Kali is a black cat and I thought I would get a white cat because at night I can't see Kali.

I went to see the kittens at Cats Protection - mainly to see the white kitten they had. There was another kitten though who was making a lot of noise. She obviously wanted some attention. I asked if the little one with the blob on her nose could be taken out of the cage and sure enough she was. She ran around, so happy and carefree. She came home with me and she was called Minti.

Minti was the light of my life, I smiled every time I saw her. She made me laugh. She created games to play with Kali - like 'pat fight' where they would sort of box without claws through the wire fence in the garden. She would ambush Kali and chase him and then they would reverse. She was always up to something.

At night she would groom Kali - lick his face and neck. He would put his front leg on Minti to keep her at it.

Minti was killed six days ago. Kali and I have lost our light and joy.

Kali knows Minti is dead as he saw her body. He now follows me from room to room. I think he is frightened.

There is a huge empty space in world where Minti used to be. She is irreplaceable.

I am shocked and my brain is befuddled - I have tears in my eyes. I cannot bear the thought that my Minti is dead. I cannot speak without crying.

Yesterday, before she was taken to the vets for cremation, I sat in my chair by the window and stroked and kissed her. It was a grey day, but the sun came out and shone on her face. She was a gift from God and I had lost her. I wrapped her in her favourite blanket and put her bed toys in her paws. I wanted her to go to Heaven with her favourites - so that she wouldn't be cold or have nothing to play with.

It was so hard handing over her beautiful body to the vet - I wanted to keep her so that I could stroke and kiss her every day. But I knew that wasn't possible. So I handed my Minti to the nurse and she is now really gone.

She was just 27 months old and I had had her for 25 of those months.


Click here to see all entries from this Pet Loss Diary

I have gone into a deep depression. I cannot get over how Minti looked after the accident. It will be forever in my mind. My beautiful little kitten …

I have made a floral arrangement and put it on the fence near where Minti was killed. Every night I go over and kiss the flowers and talk to Minti. …

After reading the information on this site I realise I am at all stages. I asked Minti to stay with us in our home. I am angry with my neighbours …