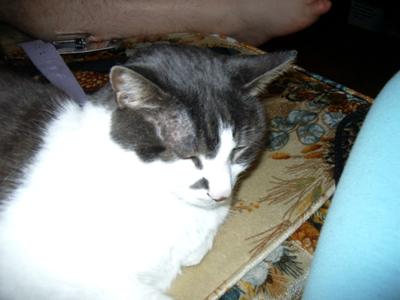 I found Axl at a pet food store, part of a local organization aimed to find homes for abandoned animals. The moment I saw him I knew he was to be part of our family. I'm not usually a pet person, so I amazed myself when I insisted that Jackie, my fiance, meet him. It didn't take Jackie a minute to decide. We wanted to take him home that day, but there were certain rules and checks to make sure we were offering a good home.

Axl was a wonderful, 14 year old loving, cuddly large cat. He was mainly white with large blotches of gray, a small grey blotch on his nose, and a coffee-stain spot on his mouth. He constantly wanted to know what we doing. Man oh man, could that cat eat! It didn't matter what we ate, he wanted some, and would eat it, too.

Lucy, our Japense Bobtail, didn't take to him so well. She was a very independent cat. In time, in her own way, she got used to him. It was funny, at times, to see how they learned cues and tricks from each other.

Axl wasn't as ok as the vet thought. He had a severe intestinal problem that had pretty much plugged him up. We discovered that there was an issue when he started going on the floor. After several enimas, exams, and xrays, not only was he backed up, but the material that was in his intestines had turned to stone. His colon had stopped working. It was all or nothing.

One surgery and several thousand dollars later, Axl was a much happier cat. I, however, was not a happier person. The operation wiped out our savings and our line of credit. Please don't misunderstand me. I was thrilled that Axl was better. I just didn't know how well things would go if there was a reoccurence with no money in the bank.

At the time, we were living in a two bedroom apartment. It got small pretty quickly. With help from my parents, we were able to pick up a house, one that seemed to fit all of our needs.

Slowly, however, we found that Axl was missing his litter box. The vet was certain that there was nothing wrong. The constant missing became a bit of a problem because we had hardwood floors. We tried everything we could get our hands on and finally found a spray that worked.

My parents stepped in and offered us some help to get us our own house. House after house, we searched and looked, um'ed, and ahh'ed. Then we found this one. It was perfect for the four of us.

Only a few months into our new house, Axl started going on the floor, in the floor vents, and pretty much anywhere that he could where we wouldn't typically find it. We tried closing off problem areas. The biggest problem with that was that we were closing off the house, one room at a time.

We tried to rationize things. Mainly, that we weren't keeping up on the litterbox cleanings. But when he stopped using the box, completely, we knew we had a problem. If money wasn't an issue, I'm sure that we could have just shrugged it off, but we never really recovered from the first round of problems. Throw on some schooling, a new house, and a new job, well, money was an issue. And with Axl already needing over $100/mnth in prescription food, there just wasn't any more.

So, we did the next best thing. We rationized some more. But he still stayed out of the box. I've always been told that a pet is first and foremost an animal -- strictly entertainment for that family. I can't say where exactly that came from, but that's just the way it was. Axl, though, was different. He was family. There was a lot of internal wrestling trying to separate feeling from reality, right from wrong, and all of that unhappy stuff.

In the end, Jackie and I decided on what we felt was our only option. Axl was an old cat, needing rather expensive food, allergic to most other foods, and no longer box trained. I'm sure some won't agree, and I'm not sure I agree any more, but that's the way it is. We made the arrangements and put him down. We were there for the whole thing. We didn't want him to be alone. I should have grabbed him and ran, but I didn't. I kept telling myself that this was the only solution.

I don't think I have ever done anything so difficult or heart-wrenching in my life. All night, I just wanted to curl up and die, or at least open my eyes and find him laying beside me.

I was always one to tell grieving pet owners to buck up and move on. I can absolutely say that my perspective has changed. A family pet can be more than entertainment, can be more than just an animal, but can be family. And family you just don't get over.

Everything I had problems with only a day ago I find petty and stupid. The house seems a lot more empty now. I think it's safe to say that we've both already thought about moving and it's been less than 24 hours. Everywhere I wander, I can see him following, or sitting, or getting perturbed that I disturbed him. I even heard him yelling at somebody while I was in the shower. The scents and smells that bothered and frustrated me only a day ago seem like heaven, in a weird sort of way.

They say, if you'll forgive the cliche, that time heals all wounds. I suppose to some extent that that may be true. But the best I think will be a scar.

May your cat-toys be endless, old friend.