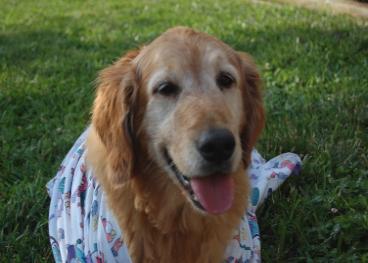 I'm writing this story 5 days after my beautiful Golden passed away. I would have never thought I could write this so soon, for all this week has been the most difficult week for me in all my 32 years. The grief I feel is nothing I could have ever prepared myself for.

I remember the day I met Clover. I worked at a Veterinary Hospital in Louisville, KY. On 10/10/1998 (my then boyfriend) brought her to me at work and I immediately fell in love. All the doctors and other techs couldn't get over how cute she was at 8 weeks. She came to work with me everyday, played tennis ball with me during lunch breaks, and kept me company through the lonely days thereafter.

By the time Clover was 2, a lot had changed. I finally met my husband-to-be (whom was taken with her). I moved and then bought her a playmate, a male golden, Opie. They have been a pair since then. Joined at the hip and in love. Clover was my first love. After being married, having 2 children, rehabilitating wildlife brought in to work, allowing 3 more cats to enter our life, she accepted them all. She knew she was loved and the more attention she received, the happier her smile beamed.

Then one day in early 2007 a bump came about on her head. Soon after 4 more appeared on her extremeties, and I then took her in to the Vet, where she was diagnosed with a Mass Cell Tumor. They remained small for quite some time and then we had them removed in Feb. of 2008.

It was then we realized that even after removal they were coming back. On April 24, another appeared on her left side and grew to the size of a small football overnight! I had never seen anything like it. I panicked and cried! She was on predisone and it seemed to shrink just as fast as it came. Next thing I knew, I had a cancer patient on my hands and I wept with grief then, just knowing I had a limited time with her.

From then on, she didn't leave my side. I even took her to my parents home in WV for one last visit. They are avid pet lovers as well. And that's when it happened. She went from eating like a horse to nothing. She got sick on the exact day she turned 10 years old. I told her a month ago she had to make it to August 3rd and then she could do what she wanted. And that's exactly what she did for me.

We made the terrible decision to let her go. She was so brave, feeling as bad as she did. The same doctor that was there with me when I first held her put her to sleep as I last held her beautiful face.

I miss you Clover and Opie misses you too. We will never be the same without you, but we will see you again. We will always treaure our time that we had with you.