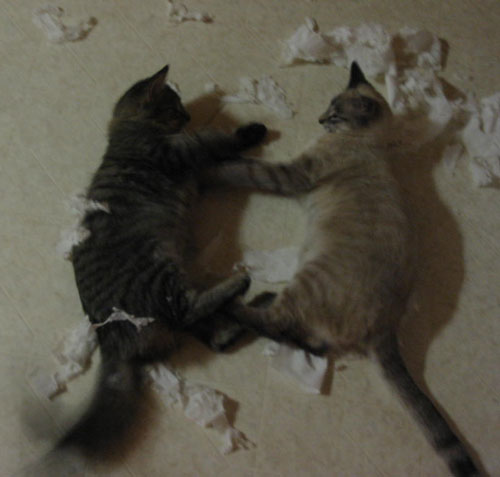 My story about Gizzy starts with the trip back home from shopping at the Home Depot store.

John and I stopped this time at the Convenience store for a soda before we got home. As soon as I got out of the truck I could hear a bunch of distressed meowing from babies.

I followed the noise to a brown paper box underneath the phones that stores have outside their building. All that noise was coming from 5 baby kittens that were just getting their eyes opened.

I am very much an animal lover and you can imagine how I was feeling at that very moment. No mother in sight, and we lived on the east side of town that lives up to its location.

I had and have to this day several animals who to me are my children as many of you know what I mean. Well John knew right away that as soon as he saw what I had there would be no talking me out of taking them home, and we did.

Another trip out to Pet Smart this time for some KMR mothers milk replacement and a few bottles and off I went back home. These babies were really hungry and were crying really loud, no telling how long it had been since they last ate.

John helped me with the feeding that day but the from that day on it was in my hands. A very big job, but to see those babies eat so eagerly and watch those tiny ears moving back and forth while they suckled was so rewarding.

I kept 3 of the 5 and reluctantly gave 2 away to friends. The 3 that I kept were my favorites. But one was extra special to my heart. I named him "Gizzy". I imagine the mother was inbred or something like that because Gizzy was mentally challenged. (FOR REAL) plus he had a nerve disorder that caused his back legs to shake if you were holding him.

He had a peripheral blind spot in his left eye. When he would try and get something with his paws like a string or whatever you would be playing with him with he would always miss it but he would curl his paws up into a tight C shape always when he attempted to get it. You had to be real slow with it so he could catch it. Even then he would miss it sometimes but would be real intent and focused on it.

He had the markings of a siamese except not dark but light pale colors. The most beautiful innocent blue eyes you ever seen. He was like a child in the toddler stage. He was very expression full and dramatic in everything he did.

My grandaughter and I gave him his first grasshopper that spring when they were everywhere and it was the funniest thing. We put it in front of him on the floor and after watching it intently crawling around (because we pulled one hopper leg off it) Gizzy decided he was going to smell it. The hopper got stuck on Gizzy's nose and Gizzy was totally freaked out.

He was backing up and moving his head from side to side picking his paws up but not figuring out how to touch his nose with them to brush the grasshopper off. My grandaughter and I laughed so hard tears were coming out. I took the grasshopper off his face and Gizzy had this look like (What did you do that to me for?)And he went off sulking like his feelings were hurt cause we did that to him on purpose.

These past over 9 years Gizzy has been a treasure to me. He was my kitten that would never grow up. That was what my vet told me. Gizzy had 3 seizures that I was aware of just in the past 2 years. We live now in a little farm house in Texas and I still have several cats and 3 big dogs. My animals stay with me as long as the lord allows them to.

I just buried a few months ago my 17 year old cat that helped me raise Gizzy and his siblings. She would get into the box and let them nurse on her to keep them from screaming to be fed, until I was able to get to the last one to bottle feed. She was a great help to me even though she had been fixed several years prior.

I guess now I need to tell you what happened as soon as I can stop crying long enough to see what I am typing to you. This happened just a few days ago on April 25th 2008. I know it will take a while to get past the stage I am in since I have lost many pets in my life to date. But this one is so much harder.

This is Sunday April 25th and my daughters 36th birthday is on the 26th. So I left the house to go and get her a present because I am the worse procrastinator in the world I think. John is in business for his self as a 24 hour mobile diesel and heavy equipment mechanic. We have a shop big enough for those 18 wheeler trucks to fit inside of next to the house.

A friend (I thought)had stopped by to talk to John about some kind of hydraulic pump or something like that. George had brought his dog with him (a Pit Bulldog)and while George was talking to John at the Garage, his dog found Gizzy hanging out by the shade tree.

John told me that he heard Gizzy screaming but by the time he got there the dog had already dropped Gizzy on the ground and he was dead. I had finished getting my daughter her present and was heading to the HEB store for a card when he called me and asked when I was coming home.

I told him I still needed to get a card at HEB and then I would be home. Then he told me that I needed to come home. I knew instantly something had happened to one of my animals. I anxiously in a loud tone asked whats wrong ? What happened ? NO,,,don't tell me. Tears already welling up in my eyes, not wanting to know, but needing to know now. Then I said Noooooo,,,,,tell me John what happened whats wrong ? He simply said Gizzy is dead. I screamed "OH GOD, NOOOOOOOO !!!!

I hung up the phone cause I nearly wrecked the truck right then. I raced the rest of the way home screaming and crying at the top of my voice. I got there 4 minutes after he called me and when I got out of the truck I saw John sitting on the wooden couch we have in the backyard cradling Gizzy in a big towel.

I was screaming nnnoooo to John and sat down beside him to take Gizzy in my arms while John was telling me how it had happened but not going into much detail. Gizzy was still very warm and looked like he was just sleeping. His paws were curled up into that C shape he aways used and his claws were out. John had the towel around Gizzy because he was bleeding somewhere around his back legs.

I held Gizzy so tight and close and kept showering him with kisses and telling him to fight it and to come back. Please come back Gizzy. I held on to him until he got stiff and cold in my arms.

I couldn't believe what had happened and the negligence and disrespect of this grown man. How could anyone be so ignorant and stupid as to let their pit bulldog out of their truck at someones house that he knew had 3 big dogs and a whole lot of cats. How can anyone do that?

As you can imagine anger took over me then. George was not there as I later found out John had told him to get his dog and leave now. So I called him, still crying of course. And I asked him how could you do that George? You knew I had lots of cats, how could you do that to me? He told me he was sorry a couple of times then he said that his dog never bothered any cats before. Still crying, How could you do that? He then told me I could yell at him or beat him up if I wanted to, but that was not going to bring my cat back.

I don't remember hanging up the phone or even if anything else was said. All I know now is that a huge huge part of me is dead too. Each day has been harder that the previous one so far. I can not deal with this pain I am having now, for it is too great.

I don't know what to do but I feel like I have to or I need to do something. All I can see is those big blue innocent eyes looking up at me and I feel so guilty for not being at home to protect him. Even if I couldn't have saved him, it would have been the last time that pit bulldog ever killed anything again. But I wasn't there and it wasn't either when I got home. I feel so helpless now. Am I just suppose to let it go???

This emptiness I have inside of me now is overwhelming and I don't know what to do. Can anyone help me ease any of this pain that is blinding me now??? I am desperate to do something about this if nothing else than to just let him know how much pain he has caused me.

Gizzy was not just a cat, but my child that I loved and love so very very much. Ohhhhh God please help me do what I need to do . . . And thank you for letting me share my story with you all. I can not write anymore.

Tuffangel - (Not so tuff now)

Join in and write your own page! It's easy to do. How? Simply click here to return to Your Pet Loss Stories - Cat Stories - G - I.