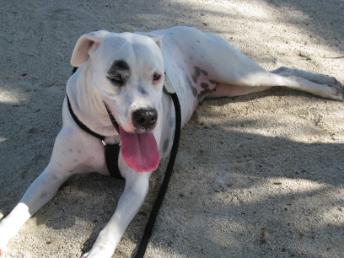 In Loving Memory of Rita

I had a beautiful mutt. I found her in Greece while visiting my boyfriend at the time, his Uncle. The apartment had connected balconies. The balcony next to his had a dog that was all white with one black eye. The marked eye looked weird and I was told she was blind in one eye because the owner did not take care of her well. The Uncle told me that the guy was looking to give her away and I went home that night thinking about her.

I spoke with my Sister and decided to take the dog and find a new home for her. I went later that week to pick her up, her name was Rita. She had never seen grass before and didn't know what the outside world was like. When I first got her she was yellow because she had been sleeping in her pee and poo. I had brought some treats with me and when I started walking home with her she was pulling like crazy and when I gave her a treat she ate in a blink of an eye and threw them all up after a few minutes because she was so excited about eating.

I tried hiding her from my Dad for a while but he obviously found out. I was trying to find someone to adopt her and it was taking some time. In the mean time, I was trying to train her and was showing her what my other dog was able to do. I felt that would help in her learning experience. I also took her to the vet to see if we can make her eye look better and the only thing I can could do was give her drops but her eye would never be normal again.

My boyfriend at the time had a friend that was interested in taking her. I had given him Rita and was very sad when she was gone. I went to visit her a few times to check how she was doing. And a few weeks later, the guy came back to me and told me that his Mother that was living with him did not want the dog in the house. So, I got her back.

After that I decided to keep her, my Dad was upset with me and was trying to find someone to take her. I kept on fighting for her and continued to train her. He started to accept her because she was so loving and so sweet, who couldn't fall in love with her?

Years passed, and she had travelled with us and brought us much joy and laughter. We moved back to Miami with her and my other dog, Maika. Maika was adopted from a shelter by my Sister.

At the age of 5, one day she started not looking well. I didn't want to take her to the doctor right away because I was living on my own now and could not afford a vet bill so I wanted to wait and see if it was just a tummy ache. By the third day she wouldn't get up and she couldn't stand to pee. I rushed her straight to the emergency hospital. They took her in and told me she would need to have a blood transfusion immediately because her red blood cells were low and she was anaemic. I had to put a $700 deposit down which I had just recently tried saving.

She ended up staying there for a few days. The vets were great and very helpful with everything. She ended up having to have 3 blood transfusion in one week. They were able to diagnose the problem which was elrichia, a tick borne disease. I remember I had seen 3 ticks on her for the first time a couple of days before I rushed her to the vet.

I started reading up about it to see what I can do on my part to help her out. While she was there, my other dog Maika which was 17 by then had gotten sick in one day and ruptured something inside her. We had to put her to sleep that same day. So I went home that night with no dogs.

After, taking Rita back and forth to the vet which was about a 30 minute drive each time, she started looking a lot better. She was taking about 5 pills 3 times a day. I could tell she was struggling and I was very sad and was crying about everything she was going through. I was taking very good care of her and we were almost on the way home to recovery. After about 2 - 3 weeks and about a $3,000 vet bill, I came home one day and my house was filled in smoke.

I called 911 and tried going inside with a flashlight and looking for Rita but I could hardly see anything. The fire department finally came and she was already dead. They brought her out and I was crying so much. There was no way she could have survived such thick smoke. My Sister left the dryer on before leaving the house and knew I would be home in an hour from work. By the time I came home the house inside looked pitch black. All my belongings were ruined and my dog was gone.

I miss her soooooo much, it's unbearable. I haven't been able to grieve about it because of everything else I had to take care of. Now that I am settled in my new home, everything is hitting me. I want an answer which I won't get and I want my dog back which will never happen.

I don't know when I'll get over this or if I ever will. But one thing I know for sure is that, she was my baby, my silly girl, my funny girl and most of all, MY ONE EYED GIRL!

I LOVE YOU RITA! YOU WILL NEVER BE FORGOTTEN AND WILL ALWAYS HAVE A SPECIAL PLACE IN MY HEART!