'The Loss of My Best Friend' 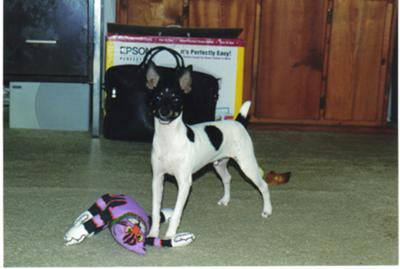 It was a rainy, cold day when I adopted Jake, he was three months old.

I carried Jake in a blue towel that evening until we got home and I carried him into my home in my coat, he popped up his head and with those beautiful eyes, gave me that "You are my Daddy" look. From that moment, Jake and I bonded forever! Jake was spoiled for almost 9 years.

Jake was very shy and skittish. You see, Jake had never been for a walk nor interacted with humans much.

I began taking him into a courtyard and then we graduated to actual walks. Jake was very scared and requested that I carry him for much of the time we were outside.

A few weeks later, we went for a walk and this guy was not only confident, he was cocky! Jake figured out that the outside world had been conquered and it was his for the taking!

I figured we went on about 1,200 walks total over 8 1/2 years and I loved seeing him have so much fun. Jake would always look up to me and smile with joy as we were walking.

Jake was rarely left at home alone, I took him to my business almost everyday. Jake was loved by my employees and customers. Jake was showered with love, attention and affection (of course, treats) every day.

One evening we went for a walk, Jake was very animated, happy and full of energy, normal for him. The next morning, Jake did not eat his breakfast. I thought nothing of it, he did this sometimes hoping he would get a treat and then eat his breakfast later in the day. Jake did get a treat later and he threw it up.

That evening, I was very concerned about him. I set out his favorite dinner and Jake did not even sniff it.

I knew then that something was wrong. I rushed him to the Doctor. He did not seem to be in pain but was weak from not eating for about 26 hours. Little did I know, but these last moments cuddling and kissing him while waiting for the Doctor would be the last time that I was able to hold him.

The Doctor checked his stool, blood etc.....and said Jake was crashing. I did not understand "crashing".

The Doctor said Jake is dying right now! I could not believe it! I rushed back up to the Doctor's office and there was Jake alive, scared and not looking very good. I spent three hours speaking with the Doctor and making plans to take action to save his life! We did not know what was causing these problems.

We gave Jake the drugs to treat his problems discovered in his blood work. The next day, Jake was doing better. I loved on him in his cage for some time. I was encouraged.

The next day, I got a call from the Doctor and he said Jake was slipping again. I rushed to the Doctors office and Jake was very weak. Then the next day, Jake had improved again but we still did not know the problem. Jake was looking at me and saying "I'm tired, I have not eaten in a few days and I want to go home".

I once again visited Jake in the evening and that was the last time I saw him alive. The next night at 11:47PM I received a call from the Doctor, he said "He is gone and it was probably cancer".

Jake died at 11:32PM on December 6th 2008. I asked to see Jake's body the next morning. I could not sleep and spent the night sobbing. I knew Jake would die one day but not so sudden and mysteriously.

The next morning, I went to see Jake's body for the last time. I petted and groomed his body for almost 1 hour and decided that it was time to let go of my best friend. I could no longer protect him nor take care of him. There was nothing I could do to get my little buddy back into his home. I requested to have his body cremated.

The first few days after my best friend passed away were bad. I was shocked, sleepless, hyper and very upset. I did not think I could make it through this painful loss without my little buddy.

Each day is getting better now and I burn a candle for Jake in the evening to let him know that I will always be here for him.

I will never forget Jake nor stop loving him. I was truly blessed to have such a great friend and our bond will never be broken!