'There is never enough time...' 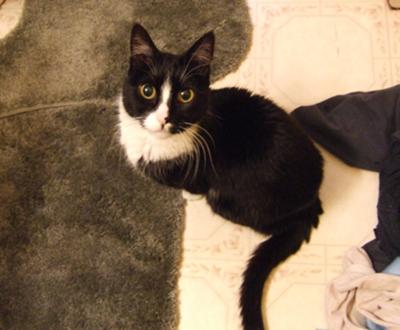 Abby's spiral downward began a month and a half before her death. At 12 she was beginning to slow down but still seemed to have so much life left. Then one morning my mom woke me up to tell me something was wrong with her. I went downstairs and discovered she could not use her back legs at all. The vet informed us that it was most likely an aortic thrombo-embolus, or saddle thrombus, blocking blood flow to her legs.

By the time we got her to the vet her condition was improving and she was getting some movement back in her back limbs, so we decided to take her home and wait for the clot to dissolve. It eventually did, but the lack of blood to her left leg, which did not come around as fast, left her left paw and leg muscles with some damage. We were optimistic though, seeing as we didn't need to amputate her limbs or put her to sleep.

We nursed her and she seemed to be getting better - except she wasn't eating very much. Over the weeks her appetite decreased dramatically and there were days when she didn't eat at all, even the foods she always loved. But still I held out hope for her, and despite my mother's pessimism I continued to take her to the vet for regular check ups even though I don't have much money.

The last week or so though it became apparent that she wasn't going to get better. All the treatments only improved her mood and eating for a short time. Her breathing was becoming very laboured and she was having a harder time moving around. The last 2 or 3 days she didn't even seem to enjoy our company anymore, and last night we started talking about putting her down.

This morning I was getting ready for school when she suddenly flopped onto her side and started dry heaving and having convulsions. I stayed with her and petted her as it happened, but I was crying heavily and I hope that it didn't upset her. I decided to leave the room and returned a few minutes later to find her still and silent.

Part of me wishes I had just found her dead later in the day because her death was obviously painful. On the other hand, I take small comfort knowing that her death happened fast and the scene only lasted a few minutes. I'm glad that I didn't have to make the choice to put her down and that her death was natural; I'd been hoping for that all along.

I miss Abby terribly. She was an intelligent cat and seemed to understand more than we thought. She sat on command for treats like a dog. She used to bring me her favorite ball to throw for her as well. If you'd ask her why she hadn't slept on your bed in a while she'd be waiting for you there at bedtime. When she was younger she'd watch us intently as we ate dinner.

She was quiet, sensitive, and very dignified; but when you respected that and treated her appropriately she would show her sweet side to you. Being the only survivor of a litter of 5 kittens that died due to malnourishment, she was a fighter and had a lot of kick in her even when she couldn't use her legs. She dragged herself down two sets of stairs, climbed up onto the couch, and went down another set of stairs to get her food, all when she couldn't use two of her legs.

I feel we developed a very good relationship and understanding of each other over the years, and I'm glad that I gave her my all while she was sick, because she deserved it. I wish we'd had more time together. 12 years seems a bit young, especially for a cat who was so bright and full of life before she became ill. Her death was 3 days shy of our 12th anniversary, October 25th was the day we brought her home. There never is enough time when it comes to a pet.

Rest in peace Abby. I will always love you.