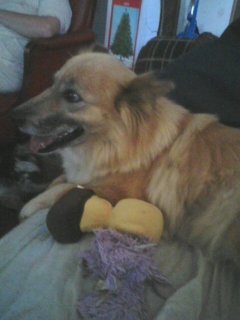 My first Christmas without you. It wasn't easy. In my search for stockings for the dogs, the cat, and the rodents (more on them in a minute), I came across your stocking, Cinnamon. I didn't even know we still had it. I thought it had been one of the stockings that had been lost during the move. But while I was digging through boxes, I lifted it up. It had your name written across it. It was written by my hand, when I was four years younger than I am today. I cried. It's almost been a year now, but I held it and I cried. It's in a safe place now. No matter how many times I move now, I won't lose it. And every Christmas for the next few years, I will hang it up beside my surviving dogs. They won't know why, but I will.

I have a hamster and gerbils now, Cinnamon. They're very cute. Spend a lot of time digging, burrowing, and spinning in wheels. You probably would have tried to sniff them, but I would have had to keep you away so you wouldn't scare them. I love them. Having animals in my life is truly a blessing. I don't know what I would do without pets. All of you were always special in your own, individual ways. And you always will be. Each and every single one of you holds a very special place in my heart. Cinnamon, I really mean it when I say you took a piece of my heart the day you died. But you left a piece of yours with me.

I missed you this Christmas. While I was giving the dogs, the cat, and the rodents their stockings - I felt like there was something missing. It was you. But I smiled when I remembered how that one year two years ago... when I offered you your stocking, you shoved your muzzle in it and pulled out the Milk-Bone toy. The toy that later became your favorite. The toy that somehow never ended up broken, even though you had a habit of "de-squeaking" all your toys. The toy that we once played tug and fetch with. The toy that now sits alone, in my desk drawer, with no dog to squeak it ever again. I remembered the way you wagged your tail that day, the way you pranced around the yard with your Milk-Bone toy in your mouth. And I smiled even with tears in my eyes.

I miss you still. This is good-bye again for now. Merry Christmas. I love you now and always, Cinnamon.