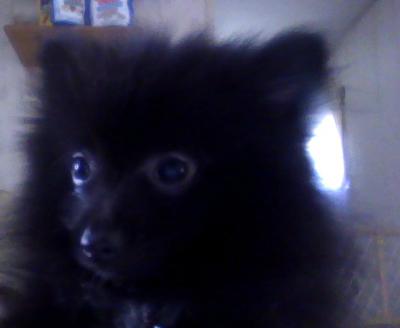 My sister has a Pomeranian now, Cinnamon. He is by no means my dog, and he doesn't live here, but I puppy sit for him every now and again. He's this little ball of fluff, black with a white patch on his chest. His name is Ninja. I think I love him, Cinnamon. It's kind of bittersweet. On one hand, I feel guilty. On the other, I feel relieved.

After you passed away, I felt as if I was unable to open my heart up to another dog. I felt as if the dogs I have would be it. I helped my mother take care of those orphan puppies and I helped her take care of that dog my friend couldn't keep... and while I cared about them, when I looked at them, there was nothing. There wasn't a click, there wasn't a feeling of content. There was nothing.

But Ninja... He's a sweetheart and the fact that I can love him makes me feel relieved. It lets me know that one day - maybe a year from now, maybe four years from now - I'll be able to welcome another dog into MY life. It lets me know that when I move and have my own place, it won't just be Sandy, Lilo, my cat, and I because I can open my heart again.

I still don't feel like I could any time soon. The hole is still there and the wounds are still fresh. I still cry whenever I see your picture and I still feel a deep sorrow when the possibility of another dog is even thought of. But holding Ninja, and watching Ninja, and playing with Ninja lets me know that one day... one day it'll be easier.

I'll never forget you and you'll always be with me in spirit, but one day, the pain will be easier. You would love Ninja, Cinnamon. He may be small but he has a lot of heart. He prances through flowers, he splashes his little paws in water, he tries to carry around toys meant for big dogs - toys that used to be yours (don't worry, he hasn't touched your squeaky bone... no one is allowed to touch that but me), and he looks like a little teddy bear. You always loved small animals, so, I'm sure you would have loved him.

I miss you so much, Cinnamon. Even now - six months later (will be exactly 6 months in four days) - I think about you constantly. Sometimes, it feels like you're still here. I know you're not... but even now, sometimes I would swear I heard you in the middle of the night when the entire house is silent and everyone else is asleep. Is that crazy? I hope not.

Still missing you from Earth,

PS Attached is a picture of Ninja. He's an adorable ball of fluff. Like you were when you were a puppy.

PPS Meepster misses having you as a playmate, too. He'll try to play rough with Sandy like he always did with you, but she doesn't want anything to do with it. Neither do Chi Chi or Precious and Lilo is a bit too rowdy. Sometimes, watching him like that... trying to find someone to play with... it breaks my heart.