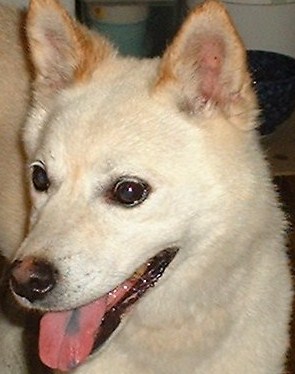 I am a 42-year-old single Canadian male on contract working in Tokyo, Japan. Almost nine years ago, while living in Japan, my girlfriend (Naoko) and I were walking along a small, suburban road when Naoko spotted a little face behind a fence looking back at us. It's eyes were almond colored, bright and hopeful.

After further investigation, we could see to our surprise that this adorable face belonged to a mid-sized, white colored dog. A dog that was, for lack of a better expression, on death’s door. It was so thin that its ribs jutted out. One of its legs appeared broken and he was incredibly weak due to lack of food and water. The dog was trapped behind a two meter high, iron fence of a huge tyre factory that was closed for the 3-day weekend. It was obvious this dog was a stray.

During that particular time in my life, I was always busy, consumed with my work, and absolutely uninterested in helping any creature in need. But even my cold, narcissistic personality couldn’t let this dog die there. So I let his eyes connect with mine and we miraculously managed to find an opening in the fence where he could crawl under and come toward us. I still remember how pungent his odor was; I had never smelled anything so horrid. What were we to do? He couldn’t obviously walk but our apartment was almost half a mile away. The only answer was for me to carry him; meaning that my clothes would be contaminated and I would most likely vomit from the smell. But that’s what I did; I picked him up and quickly (via a brisk jog) brought him to our apartment.

I opened the door and delivered him directly to the bathtub, where I gave him a thorough bathing. He stood there stunned as the warm water poured over him; and as the endless amounts of disgusting bugs, hair, and filth washed off of him, the once clear bathwater turned into a dark, dingy brown. After about fifteen minutes of repeated shampoos and rinsing, it was time for a good towel drying. The frightened and overwhelmed little dog just stood there, stiff as a board, waiting for it all to be over… And sure enough, it soon was.

Naoko arrived just as he was out of the bath and walking around the apartment.

“Oh, the smell is awful! Open the windows”.

Indeed the dog was clean (and smelled like herbal essence shampoo!) but that foul odor that so stubbornly washed off of him was still lingering (very strongly) in the bathroom and the rest of the apartment (and would for the next day or so). She looked down at the newly bathed dog,

“Oh, he looks so beautiful now”.

Indeed he was. His sparkling eyes looked at me with what only could have been only described as a smile; a smile, which in turn could have only been interpreted as a gesture of “thank you”. In tune with my character in that period of my life though, the whole time I was thinking of how I was going to be able to find someone to “take this dog off our hands.”

“This is all we need, a dog to complicate things. I hope the landlord doesn’t find out about this”.

Join in and write your own page! It's easy to do. How? Simply click here to return to Your Pet Loss Diaries - 'Mark & Bicky'.