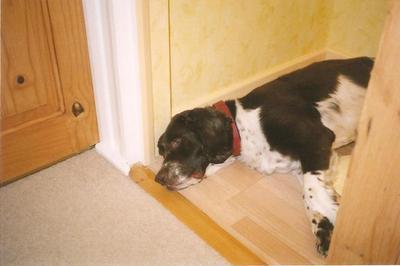 Ralph came into my life unexpectedly in 1999 when I wasn't planning to have a dog, he was 18 months old. His owner was abusive to him and while Ralph was living with me I refused to give him back and so our story began. He was the light and love of my life and kept me going when I was sad or alone for many years. He would kiss away my tears when I was sad, he made me laugh and overall he taught me how to be patient and understand a dogs world. He was independent, full of energy and so crazy at times it was hard to keep up, but I love every minute of it. Everyone knew Ralph and no one would ask how I was without saying 'how's Ralph'?

He moved with me many times to different parts of the UK for work and he was always such a good boy. There's only one occasion when he chewed anything. It was the first Christmas we were together and I was decorating the tree. I turned around to pick up the last bunch of berries and they were gone, so was Ralph. I shouted for him, no sound. I then went to the bottom of the stairs and there he was at the top, head down, tail wagging from side to side. I said "what are you doing"? He then spat out 1 single berry and it came bouncing down each stair. I went up the stairs and into the bathroom and there were berries strewn everywhere. I couldn't stop laughing, it was the funniest thing. His face when he spat that berry out was a picture.

This is just one of the many amazing memories I have of that wonderful creature. In 2007 I met my now husband and Ralph loved him as much as I did and vice versa. After 8 years of it being Ralph and I, there were now 3 of us to our family. We spent 4 years as a trio then in May 2011 Ralph started going downhill. I had staved off the effects of his arthritis with Joint Aid and lots of other supplements but now my boy was crying in pain in the middle of the night wanting comfort. We took turns for almost 6 months to sleep on the sofa to be near him and comfort him as he was too heavy to carry upstairs.

Then after visiting 2 different vets at the surgery they advised me it was time to think about putting him to sleep, my boy, my life. It got to the stage that even the strongest pain killers wouldn't relieve his pain. He started to look really sad and low and he was collapsing all of the time. His muscles had wasted to a terrible extent. Then 2 days after seeing the vet Ralph looked at me and his expression spoke volumes. He looked at me as if to say 'help me, make it stop' and that's when I knew it was time. He tried to follow me up the stairs twice and I knew he wasn't well and needed comfort. I asked my husband to make the appointment for the following Saturday 5th November 2011 to put him to sleep. I took some time off work and spent some time with my boy telling him everything I needed to tell him. He knew I was saying goodbye.

The grief I felt leading up to that final day was like nothing I have ever experienced before. I was a mess but I knew that I had to be strong for him on the day. The only thing that would relieve his pain that last week was Baileys liquor, he slept like baby and didn't have any pain at night. I slept downstairs with him on the blow up bed his last night and he slept for 7 hours without moving a muscle. It was wonderful. We took him the next morning to see our new house so he would know where to find us and took him for some short walks. His tongue had started to turn blue that last couple of days and he was gasping for breath at times so we knew that we had made the right decision, but oh how hard it was.

I lay on his vet bedding with him on the floor of the vets waiting for the sedative to take effect. He kept coming up to me and licking my face, his last thoughts were to comfort and reassure me. Due to Ralph's strength of will it took 10 minutes before he slowed down and came down to lie next to me. I had this strength and calmness come over me that I never expected to have but I guess I knew I had to be strong for him as he was so good at picking up my emotions. My husband was sat on the sofa in the surgery opposite us. I told Ralph how much I loved him and how much he meant to me. I told him to go with my Nana and Granda and they would look after him until I could be with him again. I asked him to follow us where ever we went and that he would always be with us. I had asked my Nana to come and wait for him and I believe she did. The vet gave him the final injection and in less than 30 seconds he was gone. I have never cried or grieved so hard in all my life.

I still find it hard, just over a year on. This will be our second Christmas without him now. My heart aches for my sweet boy, but I know that he is no longer suffering or in pain and that means more to me than anything.

Rest well my darling Ralph. I can only hope that one day, after that final goodbye, there will be another hello.