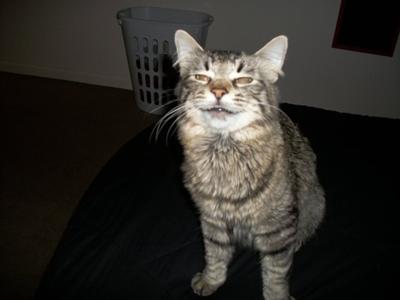 I considered Rocky my baby and she was such a wonderful cat. She was the most loving animal I had ever had. I raised her since she was a baby, and we had a tight-knit relationship. It's hard to believe that she is gone because I had her so long. The vet said that they think she had chronic kidney failure disease, which I never knew.

My husband and I decided to get her spayed because she seemed in agony while she was in heat - losing a lot of weight. So we took her, unknowing she had kidney problems. After her surgery she seemed druged up, but we thought it was normal. After two days of no change we took her to the vet and they found out that she was suffering from severe kidney failure. They gave her meloxicam and put her under - which in turn made her kidneys get worse.

We did not know she had kidney problems and I am having a hard time not blaming myself for her death. I know the disease she had was terminal but I could of had more time with her, but I feel that I cut it short because of taking her to get spayed. When the doctor came in with her tests she said her kidneys were in very very bad shape, she offered an expensive treatment of fluids and food for 48 hours. She told us that she did not think it was going to work because her kidneys were so bad.

I did not want my Rocky to suffer or die without me being there. I decided to put her down, which is eating me away, and both me and my husband were there. When they injected her she looked for me in the room, found me and then stared at me till she passed, and I can't get that image out of my head and it hurts so much. I dont know if I made the right choice, I don't know how much longer she would of lived without me getting her spayed. I miss her so much....

Rocky was such a great cat she will always have a piece of my heart.