'The Day Without a Goodbye' 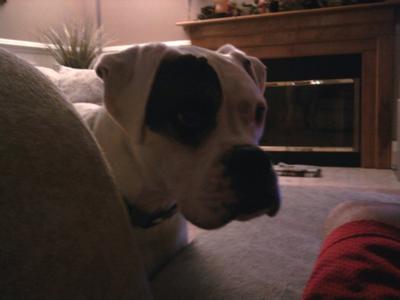 My dog, Petie, is a white boxer. He has a black patch around his eye and black spots everywhere else. We adopted him from an owner who was moving far away. The look in his when our eyes first met was like an angel that will never leave your side, a companion that keeps me company when I'm upset and lonely.

The first year we had him he was still a puppy, a year old. I was 5, so this dog was my life. Being so young I thought he wouldn't mean too much to me as I got older because I would be out more often. But, that is exactly the opposite of what happened. 9 years and 7 months I spent everyday thinking about him no matter where I was. Day after day we became closer, almost like a friend, but he meant far more than that.

Saying goodbye to him in the morning, before I left the house, was a tradition that began when one day I decided to give him a kiss goodbye and it turned out that it was the best day of my life. He was my lucky charm.

The first day I didn't say goodbye to Petie since the day I began to, when I got home he had a slight limp to him. We found out later on that he had arthritis in one of his hind legs. The way he limped never changed since it began. I promised myself I would never again forget to say 'goodbye'.

Horrifically, 4 years later I forgot to say it again. I didn't realize I forgot until I got home from school at 3:15 and he was laying on the couch barely moving a muscle. My brother, 16-years old, two years older than me, and I told ourselves that he was just really tired. Actually, a month earlier my parents payed for surgery to remove a couple growths that were iritating him. The veterinarians put him on medication, which is why we thought he was tired. When we finally forced him off the couch about 10 minutes later, he was walking very abnormally. Again, we thought it was just a freak thing.

Petie would not eat, drink, and as soon as he stopped walking just plopped on the floor and lied there with an extremely worried look on his face. By then I knew it wasn't because he was tired. My brother called my mom at work, in Providence, and until she got home a few hours later we kept a very close eye on him. All he did was lay down with his eyes wide open. Petie loves car rides, so when my mom got home she immediately said, "Petie, wanna go for a ride?" in a very excited tone. He barely lifted his head off the ground. After a couple of trys he finally got up, but it wasn't over yet. In order to get in the car, he has to jump a little ways which he's had no problem with, even while having arthritis. She lifted him up to the car and rushed him to the veterinarians down the road.

Scared for my life, I got a call from my dad a while later. My dad had said the nurses there sent him to a different vet because they didn't have what was needed to examine him. Sitting, waiting, fidgeting, and pacing back and forth is what I did for the amount of time they were gone, which felt like a lifetime in my shoes. The worst news a 14-year old could ever get about her most beloved pet, "We had to put Petie down," were the words that studdered coming out of my mom's mouth as her and my dad had 100's of tears pouring out of their water-filled, gloomy eyes.

To this day, including right now, I cry for the most memorable dog I've ever known, Petie. Goodbyes are very diffucult to state, but saying them makes you feel so much more relieved knowing if anything happened to them, you left with a happy ending.