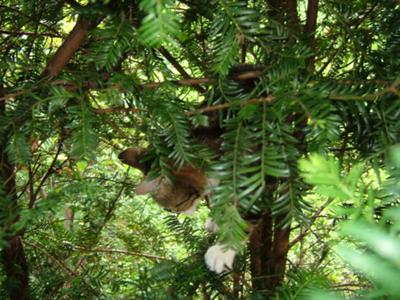 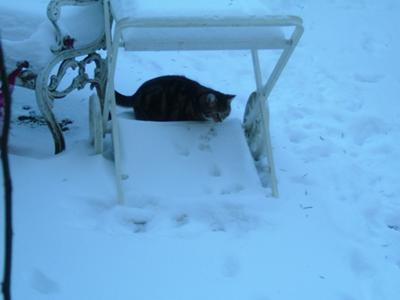 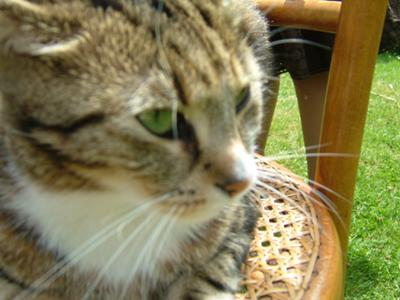 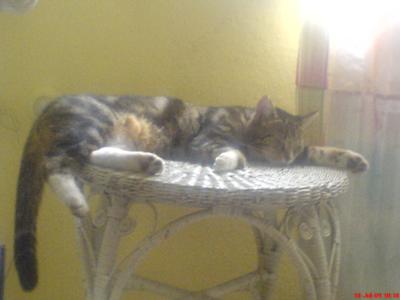 Oh how God loves us and longs to teach us this unconditional love. I learnt this love from Tiglath Pileser. On Sunday the 29-6-09 I was out in the garden and discovered a cute little tabby half in and half out of the basket and tunnel I had in the garden for the hedgehogs. God gave me my birthday present a month early that year. I told him to come inside and he came in ate some food, drank some water mixed with milk and then took a tour of the house and sat down on the couch as if waiting for me to join him. That was the start of a very special relationship with this wild, funny, sweet, schmoozy, simple adorable, incredibly intelligent, freedom-loving cat.

He was a predominantly grey and white striped tabby. He had 4 long dark black stripes along his back and then in rings around his tail and legs, white socks and a white vest with polka dots of grey and brown and white on an orange background. He had a circle of black on each side, on the one side there was a heart in this circle and on the other a cross, or with a stretch of imagination the map of India.

He always cleaned himself meticulously, so all the whites were shining white and he had simply adorable green eyes. I love green eyes because my mother has green eyes. Coincidently or God - incidently these two green eyed beautiful beings are the only ones who have ever loved me truly, completely and unconditionally.

I first called him Tiger because of his stripes and colouring and because I was not sure that he would stay and whether I could keep him. Then I noticed what a hunter he was and the name Tilgath Pilneser from the Bible came to mind, but he was a cruel King and I did not want to name my sweet cat after him. So I named him Tiglath Pileser. It made perfect sense at the time combining his hunting capability, his aristrocratic bearing with the redeeming features of God’s love.

From the first day on he slept cuddled up close to me and was my alarm clock before the birds in the morning. My Mum arrived on a visit two weeks later and he slept with her the first night and last night of her visit, my Mum wise as she is realised what an honour it was. My sister arrived with her kids 3 weeks later and Tiglath Pileser won their hearts completely with his antics and climbing trees and playing tag with the children and all the dragons (flies) he would subdue, along with birds and a multitude of mice bit the dust only after going through his intestinal tract.

I remember the frogs in the pond dwindling and Anke standing at the pond and saying to me ‘Deirdre I think Tiglath Pileser has only 8 frogs left’. I remember my sister Naomi coming to me the first night and saying hey his white paws are coming out at me from under the bed what does it mean? He just wanted to play with her. He’d sleep with me as usual during the night and then go to Daniella in the morning for snacks and play with Isabella who was usually the first one up on these family visits.

He knew exactly how to get me to open a door or window to go out and knew exactly on which window to knock to get back in again. Cleaning windows was never easy because he thought is was a game and would play with his paws on the other side of the pane. I was always filled with joy when he came home to me. Even 3 and a half years later I couldn’t get over the fact that he chose me from all the families around. The vet said he might have been around 6-9 months when he arrived on my doorstep. I couldn’t believe my being blessed with him.

There never was a dull moment with this little energetic bundle of joy. He was so playful and mischievous and yet was never angry and I could cuddle him and cat yodel him and run and have him chase me and ambush me in the garden. He would go absolutely bonkers with a red laser pointer and would even climb walls to get it. He loved his salmon snacks and I just had to shake the packet sometimes to get him to come to me. He knew when I called and even if he did not want to come inside he would show himself to me, so that I wouldn’t worry too much I guess. I could never close the bathroom door when he was home, he would always bang on it and sit with me no matter what I was doing and play with my necklaces on sit on the clothes I had discarded for the wash.

I spent 8 months in Munich working 3 sometimes 4 days a week and was only home weekends and I missed him so much. But my neighbours were kind enough to feed him and look after him when I was gone. When my window shutters on the garden side were down Tiglath Pileser knew he had to go upstairs, of course I would also explain the whole situation to him every Sunday. Monday early in the morning I had to put him out, it would really tear my heart out, usually he was the one up with the lark and out like a nut chasing every bird in sight. Then carry the cat toilet and his food etc and leave it on their landing. Pick all the stuff up again on Wednesday or Thursday and then he wouldn’t leave me out of his sight except for the occasional hunting spree and visit to the neighbours.

Mornings if I did not wake up soon enough for him, he would try to bite my toes, that always got me up like a pistol shot. He also liked to play and claw my hand as if it was a mouse or something that he had to subdue but never had any intentions to hurt me, any scratches were unintentional. I was so much bigger than him but he had absolutely no fear. He’d climb the tallest trees, dangle precariously on roof edges do pirouettes on garden posts and visit all the neighbours. He also thought it funny to eat my food if my spicy sometimes Indian meals were interrupted by the telephone or if I was sitting somewhere and got up for any reason he would go and sit exactly where I was sitting.

He was just the cutest. If I was on the computer he'd come and lay down between the computer and me and most often immobilise one of my hands, to make typing difficult and making me direct my attention on him. Or if I was watching something on my laptop, and I moved the mouse for some reason he try to paw it. Oh my goodness he was just so adorable. When Kilian came down to study, we would sit concentrated at the dining table and my darling Tiglath Pileser would do his best to distract us, strolling on the table close to us, sitting down in eyesight and being absolutely adorable so that we just had to cuddle him, or if we remained steadfast start playing boisterously on the carpet so that we usually couldn’t resist.

I remember once when I was sick and I just lay in bed in morning, he lay on my chest, with his nose close to mine as if to check my breathing and every time I opened my eyes, he was there looking at me as if watching over me.

Then on the 17th Jan night 2012, he came home somehow different and unusually quiet and vomited a couple of times in the night. I thought it was just something he had eaten, I thought I’d give a day and then go to the vet. I never suspected anything serious, how could I, after all God sent him to me and he was protected I thought. However he had broken his back irreparably and I did not know it, although I noticed his tail hanging limp. That had led to complications with his bladder. The vet x-rayed him and said I must take him to the clinic in Duisburg, which I did and I left him there overnight without saying goodbye. I had put him God’s hands you see….

I never thought in my wildest dreams that he would die, I thought the worst that could happen would be that his tail get amputated. I had prayed and believed. I should have stayed with him, because the next morning the doctors said he shouldn’t be woken up from the anaesthesia at all. His back was broken and that could have been fixed if the nerves were still attached but they were not and there was absolutely nothing the doctors could have done.

I had a few minutes alone with him. I don’t know whether he could hear me or feel my love through the anaesthesia and then she injected him to stop his heart and my heart broke too. The time was 11:55am 19-06-12. God I hope someday you’ll tell me why he had to leave me so soon.

I hadn’t made any videos of him snoring or dreaming or just breathing or singing or talking to me. I still hadn’t mastered his come hither look, I hadn’t taken enough pictures either of him doing a spagat on the branches over the birdfeed, lying in wait as if the birds were blond, or climbing trees or walking on the frozen pond to impress me. Summer evenings on the swing were delightful because he would be trying to catch insects but in the dusk I couldn’t really see what he was chasing after and it just seemed as if he was dancing just for me.

In Winter he sometimes chased every snowflake like a proverbial mad hatter and brought me to tears with laughter. He was such an unusual cat and God you seemed to have made him perfectly suited to me. I felt so blessed to have him and feel so bereaved to have him taken away from me so abruptly and without any warning. Perhaps it was the best thing for him, especially if he is whole and happy and with you Jesus now.

I miss you so much my darling Tiglath Pileser Mileser Mascatoni, the pain of losing you is unbearable. I miss your voice, your brumming and antics in the morning to get me out of bed, the smell of you and how you felt in my arms. Tiglath Pileser you were a gift from God, you were my Jesus cat and I shall never forget you. You were the best cat I could ever have.

Thank you so much for loving me and choosing to be with me out of all the other people in the neighbourhood. The three and a half years you were with me were far too short but you filled my life with so much love and laughter and happiness. I hope you are waiting for me in heaven. My mansion wouldn’t be the same without you there. Now I have to live without you but I hope I have learned from your indomitable spirit and unconditional love.