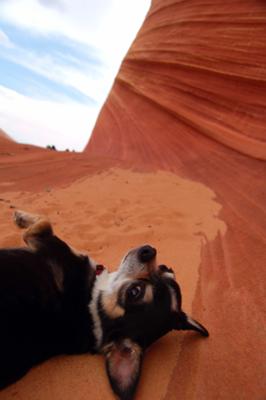 I rescued Paco from a crack house. I was working as a high school teacher and one of my students called to tell me of a bunch of little dogs at this apartment in a very bad area. I immediately went to get them armed with nothing more than a cardboard box to place them in.

Upon arriving, I was greeted by an array of very creepy people and several dogs. Some were big, 5 were little chihuahuas. I collected the chihuahuas, taking special notice of the little black one. He was so pathetic and extremely emaciated.

The little dogs were all very malnourished and had the most horrid cases of worms I had ever encountered. I treated them for worms, gave them shots and found them homes. With the exception of the sickly little black one. He was just too unhealthy, too thin, to rehome. I fed him hamburger, rice, and cottage cheese by hand.

After a few weeks he was healthy enough to take in to be neutered. Then, he would be ready for rehoming. I have no real memory of the days before the neutering. I had rescued many dogs and this was simply another rescue that would go to a happy home outside of my own.

I was not particularly attached to this little dog. He required a lot of care and seemed very needy but I had 6 dogs of my own. I do recall he was an escape artist. When put out in the back to potty, he would miraculously show up on the front porch. We soon discovered he was CLIMBING the chain link fence.

Then one day while on my lap, he began suddenly barking in my face. I was shocked and couldn't figure out what the problem was. I soon realized he was playing with me! He was being 'scary Paco'.
The day I took him to be neutered was the first time he had been away from home and me, other than my going to work each day.

When I went to get him, the vet techs sighed in relief, as Paco had been crying for his Mom. That was the moment I knew that this was MY dog, forever.

A few months after I ended up making a huge life decision to leave my husband and move to a small and very remote community in the four corners region of Utah. I took Paco, my jeep, kayak, and some of my clothes and went to new life in a place I had never been.

Paco became my constant companion. Living remote in this beautiful area, we hiked and backpacked frequently. People were always shocked to discover a 4 lb chihuahua could cover the miles and terrain that Paco so easily did. We took up other activities as well, like technical canyoneering, rock and ice climbing, and back country skiing.

Paco fit perfectly and happily in my pack when it was too wet or cold for him to walk on his own. He went everywhere with me.

We eventually moved to Las Vegas to be closer to my family. We continued our constant outdoor activities. We started hiking to some beautiful hot springs down a side canyon on the colorado river once a week after school. We hiked this canyon countless times and Paco had even found his very own secret shortcut routes.

Everyone that knew me or knew of me, knew of Paco and he was a bit of legend with his outdoor abilities and general cuteness.

One day, on a routine hike to the hot springs, we came across a rattle snake. I carried Paco well past it and hiked on. A few seconds later I heard Paco whelp and turned to see him running at me with two spots of blood on his muzzle. He had gone back to fight the snake and had been bitten in the face.

I ran him back to the car and rushed him to the vet. Money was no concern, Paco meant everything and was worth everything I owned or ever would own. But that didn't matter. He was just too tiny for that venom. The vet did everything she could. He died within 3 hours.

I could not believe that brave little boy, my very best friend in the world ever, my dream come true and little source of happiness, was gone. And it was all my fault. I took him there. I let him down too soon, didn't see him run back. Why couldn't the snake have bitten me instead, I would have survived. How could life go on without Paco? How does it still go on?

Paco would not have fought that snake if he knew it would kill him. It was my responsibility to make sure he did not go back. I just didn't know he would, that he was interested. I should have known, though. That was Paco's nature. He would take on anything. He thought he could take on the biggest dogs, marmots, bears and even packs of coyotes. and a rattle snake.

I miss him so much and know that some day I will be reunited with him at Rainbow Bridge.

This story may seem long, but there is soooo much more. Paco lived an amazing life with many, many adventures. He was amazing and adorable and loved his life. He was the center of my universe and the envy of all my friends and family. He was truly my little source of happiness. I hope he knows how sorry I am and how much I miss him. I hope he felt no pain.