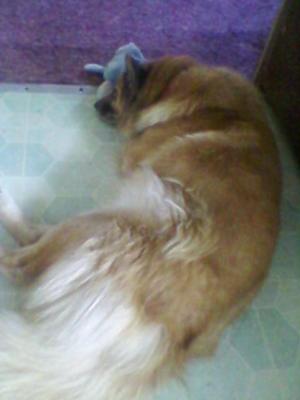 I know I just wrote an entry for this diary a few days ago, but I feel as if writing again might help me. I'm not sure, though. Things have gotten rough. All denial that I might've still been holding about losing you is completely gone now, and the anger is gone, too. Now, all that's left is sadness. I keep thinking about you. I think about you more often now than I did in the beginning. Everything in the house seems to remind me of you. It's like every time I turn around, you're there. And yet, you're never there. I can't even pass the spot on the floor where you laid last without feeling that void.

The past few days have been so bad that I have felt physically ill throughout them. I've been having trouble sleeping, too. Because no matter how tired I am when I lay my head on that pillow, thoughts of you keep my eyes open. I came across your blanket the other day and it was still covered in your fur. It even still smelled like you. I was holding Sandy the other day, petting her, speaking to her... and yet, when I accidentally tapped her nose a little too hard, it was your name that almost slipped off my tongue. And when I realized it almost had, I had to bite my tongue.

It might seem strange, but the only way I can even get to sleep at night any more is if your favorite toy is in my pillow case. It's become almost a ritual since these constant feelings of sadness have come. Sometimes, if I roll the wrong way, it squeaks, but it doesn't bother me much. I don't want to feel this way. It hurts so much. It hurts more than it did the days following your death. It hurts more than the denial did. It hurts even more than the anger did. But the fact that I can feel it reminds me of how much I loved you. It reminds me of what a great dog you were.

I keep thinking about that time you went missing a few years ago. It was in April. I was so scared during that time. But I never gave up hope of finding you. I walked all around town in the blistering heat (because down South, we have no Spring... we skip right to Summer) looking for you. Every single day. I put up fliers, spoke to everyone I saw outside. I was full of grief then, too. But I never gave up hope. And when you did return, I felt like I was the happiest person alive. I keep saying that this is like that all over again. And it is. But this time, I have to accept the fact that you're not coming back. And I thought I was starting to accept that, but now, I'm not so sure.

I've always been a logical person. I know you're gone. I don't look for you. I don't even accidentally prepare food for an extra dog. And the only slip up I've had was almost calling Sandy by your name. But even I find myself looking for signs of you. I know I won't find them, but part of me wonders if it wouldn't hurt to look. All I find, though, is an empty blanket, a lonesome toy, a collar without a dog to wear it. And it just hurts so much.

I'm trying to do my best to be strong for the other dogs, because I know they need me. Sometimes, though, it's hard. I know you're still with me in my heart and knowing that does help a bit, but the hurt still tugs at me. I guess, I've found my own ways of coping. We all go through grief in our own ways and I've learned more and more through talking to others online that it's normal. That there's nothing wrong with me holding onto your collar and your toy, because how I deal with grief is my own and the fact that I'm dealing with it at all is healthy. Speaking to people online has helped. I just feel like I'm losing it Cinnamon. I know life will go on, but I just can't help but feel as if something is missing. And that something is you.

Your human still on earth